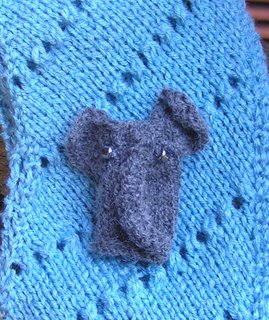 I'm making a set of finger puppets for one of the grandchildren at Christmas. This is the first I did. he yarn is some leftover Caressa and the beads used for eyes were leftovers from the Caressa Odessa hat I made for a daughter in law.

His trunk seems to have a kink in it. He needs a bit of blocking, but if the kink stays, I'm not really bothered by it.

The pattern is in the 2007 Knitting Pattern a day Calendar. I usually have trouble finding this calendar but was walking along a city street a week ago and passed Borders. There they were in the window, so I bought one. Not only have I now bought it, but I've been through and made a note of the thingsI want to make. There are lots of things I would never consider, things I have no one to give to and so on. However, I still like the concept.

MIL is now in the nursing sectionof the home after the seventh hip dislocation and the third hip replacement. She won't do the physiotherapy and so can not look after herself. She hates getting out of bed and has now lost the hostel room she had. We had to clean it out for a new occupant. She had a whole heap of costume jewllery, most of it junk Strange really for someone whose brother was a wholesale jeweller with access to good stones and manufacturers. I have sorted it and kept the good stuff. I've given the DILs and grandaughters some keepsakes. There was a pile of broken junk and I was going to toss it. However, perhaps I'll have another rethink abut this. I could use some of the beads.
Posted by Jan at 9:09 am