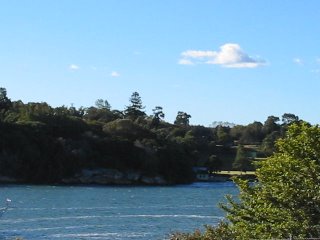 Saturday was a beautiful day here. The temperature was warmish, it went to about 31°. Yesterday was much the same and today the morning will be similar, although there is a change on the way. Today's sky has lots of heavy clouds coming up from the south and a southerly change is forecast for the afternoon.

The picture was taken at the edge of the Parramatta River at Abbotsford, about 10 minutes by car from my house. From this time till early autumn we have lots of picnics along the river. There are many beautiful spots on both sides from here to Gladesville Bridge. This look across to just below the old Gladesville Mental Hospital.
The point is called Bedlam Point. In the nineteenth century, patients for the hospital were taken by boat to here and transferred mid-river to a row boat to take them to hospital. The wake comes from the hydrofoil which had just passed on its way to Parramatta.

As you can see, it was low tide and there is a very small, sandy beach over the river. I wouldn't swim here. The river is still salt for a long way upstream and there are often shark sightings. Not far from here a canoeist some years ago spent a frightening time on a buoy. He had climbed onto it after a shark threatened his canoe. He was eventually rescued.

Knitting? I've finished the first Westport Waves sock, pictured below. I've also done the first sleeve in a simple, plain jumper for friends who are expecting their first child next year in autumn. This baby is long awaited and much wanted. Pictures later when I get more done.

If you live overseas, not in Australia or NZ, don't forget to leave a comment in the post below called TIMTAMS. Contest closes next Sunday afternoon at 4:00pm Australian summer time. Prize will be some TimTams! Enter as often as you wish.

Later: It didn't even make it to the afternoon to storm. About 90 minutes after I wrote above about a storm, I glanced out out of the window. Raced out to the clothesline and grabbed things. Just as I came inside there was a loud clap of thunder and down it came. Fortunately I'd had two loads of washing done quite early. Most of it was dry and this was just before 11:00am. The damp towels and a couple of thicker tops of mine are airing in the dryer. It's still warm, the southerly hasn't arrived yet, but is obviously on its way.
Posted by Jan at 9:30 am

Ooooh! I used to live in Parramatta.... a looooong time ago!

What a gorgeous picture! It's like that cloud posed just for you. Such a peaceful scene, and storms and sharks lurking behind it...yikes!