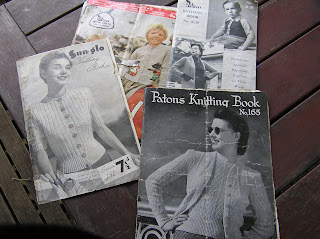 Sometimes you can be in the right place at the right time. Lately I haven't had much success in op shops for knitting things. However, the patterns shown cost me the lump sum of $1.00 at my local Salvation Army shop. (Click for larger picture) The one with the lacy patterns has some really nice pattern stitches in it. It reminds me of the cardigan I made for my mother when I was still in High School. It had a lacy ribbed pattern of six or eight stitches and the sleeves were an integral part of the fronts and back. It was kntted on what were then called size 12 and 14 needles. Quite small and across the back had about 350 stitches in wool to accommodate the short sleeves of the jacket.


The book which talks of using thick wool has Patons Totem for many of the patterns. However, it also mentions Bluebell Crepe as a thick wool. Bluebell is nice yarn and is still available but no way would it be classed today as thick wool. It's a 5 ply I think. The jacket for mum was done in Bluebell and still looks good after too many years to mention. That book has both adult and childrens pattens in it and I could easily do many of the children's patterns today. Just have to get the names out of my mind. I don't think there are too many little baby boys being named Eric or Donald today in Australia.

One of the other books has creations for women - all of them named after Sydney beaches, Tamarama, Bondi and so on. And will you just look at those prices. Australia changed to decimal currency 40 years ago today. Sevenpence halfpenny, even allowing for inflation seems mighty cheap to me.
Posted by Jan at 8:46 pm

Great OP Shop finds and yes blue bell is 5ply - LOL at it saying that it is THICK! hehe