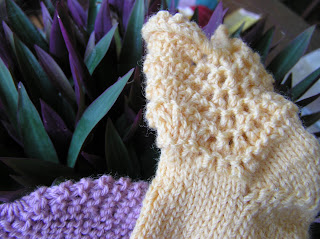 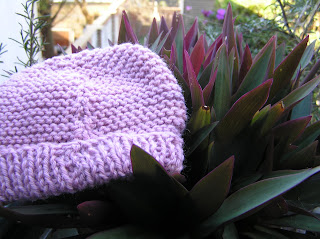 The current colours are pink, yellow and green. I've had plans for some arty-farty type projects and presentations, but life has got in the way of these. Lots going on, much of it unsettling and unpleasant and certainly most of it quite busy. So arty-farty gave way to utilitarian.

The little pink hat is not quite the right colour. It really is pink-pink, not purple-pink and it's for the African AIDS babies charity, along with other jumpers and hats. I wasn't careful enough with the photo. I've just noticed I put the hat down seam side up. Its pattern shows it's knitted flat, decreases done and then seamed. i did do a couple on dpns, but actually found the tiny size worked quite well done flat and then seamed. A very quick knit with their pattern and 8 ply, DK wool.

The little creamy yellow sock is for Miss Two. Meant to be a bed sock, it's also DK and took next to no time to make. Second sock is on the way. She gets very cold feet at night. At least she can now tell her parents what's wrong if she wakes. When she was smaller, it took them a while to work out that she had cold feet when she woke in the night and cried. It's feather and fan, but that doesn't show too well becaue there are really only two repeats. I've done them on 2.75 mm dpns, so the fabric is quite firm. Cleckheaton machine wash wool, but I must tell DIL that the dryer probably is not a good idea. I still have ends to weave in on this but will wait till sock#2 is done and do the two together.

I don't know what the name of the plant is. It was part of a birthday present last year for me from my mother. The outside of the leaves are very dark green, while the inside is definitely a deep pink/purple. The leaves are not waxy, but fairly soft. It's quite different to most of my other potplants and I like it. I think that the purple leaves are actually influencing the colour of the little pink hat somewhat. Anyway, I had the plant so used the colours for project spectrum.

The next project spectrum colours for June/July are red, black and metallics. I have red and black but metallics are not usually my scene. However, I'm considering something more metal than metallic perhaps. I might do some beaded serviette rings in wire for my sister's birthday,coming up in September. Or perhaps red and black wristwarmers with metallic couched threads. Hmmm, now that's a thought.
Posted by Jan at 10:08 am