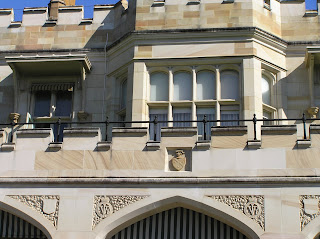 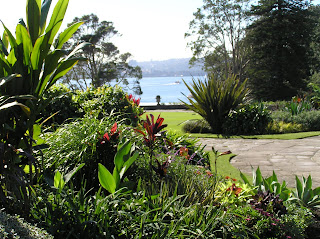 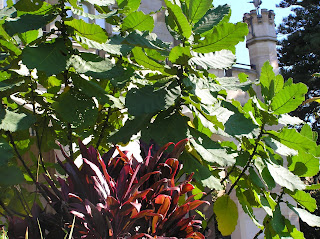 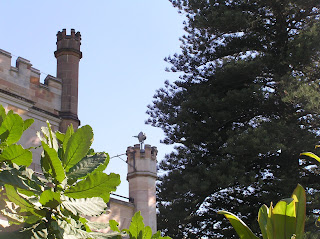 These pictures were taken at Government House in Sydney, where I attended an investiture presided over by Marie Bashir, the Governor of NSW. I was there as the guest of a friend who was raised to a higher level as part of St John Ambulance.

The sky was actually much bluer than appears here. It was a beautiful day in Sydney with a lovely crisp morning. However, we still need rain and weeks of it, so hopefully one day soon, Saturday sky will be grey. Above the buiding in this first photo, the sky seems bluer. 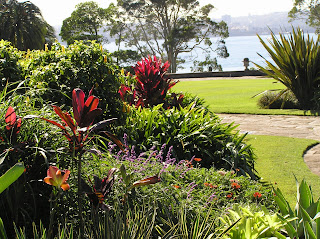 The place was amazing - I've not been inside before. Set on the point, overlooking the harbour. Inside, the ceilings must have been at least 25-30' high. The room where the investiture took place had an elaborately painted ceiling with hunting scenes, lutes, mandolins, horns around the edges. The cornices were amazingingly intricate and large with one concave part being painted in narrow stripes. It would cost a fortune to maintain such a building.

The ceremony was formal and impressive and there was a reception held outside under a colonnade and in the garden, The Ambulance band played during this time. I have more photos, but they are more personal and I don't know that everyone shown in them would want their faces across the internet.

Knitting? I've been working on grandchildren's socks, but the last few days at work have been busy! Too bad, more money, less knitting. I also went back to the hoodie pictured below and finished the hood part. I was going to DIL's on Friday for a haircut, and waanted to be sure the neck would stretch over the head of my small grandson before I went too far in finishing up the whole jumper. His dad had a large head as a child. It never looked out of proportion, because he was tall and is now 6'5" but I had trouble finding suitable hats for him. However, this will go over Finn's heaad so I've finished the hood. I've cast on for the second sleeve and will probably finish that today. They are dropped shoulder sleeves, so easy to sew together. After that I'm not sure what I will do next. Probably socks for his big sister so she doesn't feel left out.
Posted by Jan at 8:21 am