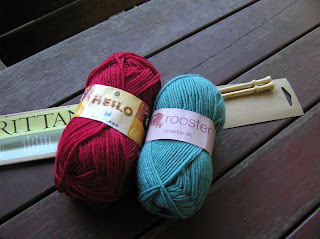 I received a pleasant surprise in the mail yesterday. Brittany needles, 4 mm in size with unusual ends. Also in the long tube were the two balls of wool shown. The Rooster almerino DK is 50% merino and 50% baby alpaca, 112 metres, 50g and is beautifully soft. Colour in the photo is fairly accurate. Its tension shows as DK. The red is Dale of Norway Heilo and it's not quite as red as shown here, more of a maroon. I think it's worsted weight, although I haven't checked with my references yet.

These were all a thank you gift for something I did for someone else a little while ago. I wasn't expecting any recompense. I acted because I thought that some large multinational company might very well be pulling the wool over the eyes of a small Aussie group. I wasn't really thinking when I used the phrase pulling the wool over the eyes but it's an apt phrase in this case! It seems my suspicions had some base as was shown by my actions and those of quite a few other knitters.

Winter seems to have finally decided to arrive here this year. It was quite chilly as I walked down to the bus at 6:45 the ast few mornings. It's about a 15 minute walk and the temperature was just on 8°. My hands were quite cold as I had stuff to carry. So I'm thinking the Rooster alpaca/merino might turn into some wristwarmers for me. I do have good gloves, but the alpaca sounds inviting.
Posted by Jan at 10:37 am