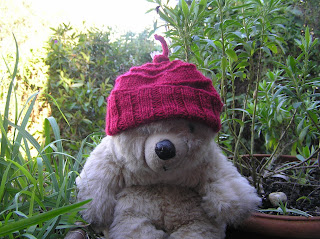 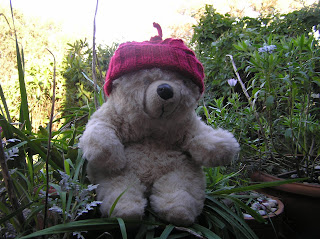 Saturday sky rolls around again and it's a bit hard to see here as the brighter red has sucked any colour from the wintry sky.

Susannah, my model, is glad to have this cosy hat to wear. The sky is actually a pale, icy blue. However, she's wishing she had a scarf and perhaps some mittens too as it's chilly out on the deck. It was 3° in the kitchen this morning and much cooler outside and it's now about 10° early in the afternoon.

This is the mindless knitting I've been fiddling with all week. Not much thought was needed to make it and that was a good thing. I've had a lot of unpleasantness here and I can feel the stress in nausea and in tight muscles across my shoulders and neck. It's also shown up in big lapses of concentration. I've been in the middle of saying somethng important when suddenly I have no idea where I've come from or where I was intending to get to in what I was saying. I mentioned this on Wednesday when I was speaking to a counsellor and she told me this was a normal reaction and would go away.

I was planning on giving this to eldest grandson, but I think he will feel it's a bit feminine looking. He's very boyish and I'll start another one in some grey/blue Jet from stash and do it probably in rib. Morgan is very fair and this deep colour will suit her. It's the Heilo pictured a few posts down, part of a a gift from yarn magazine for some photos I took for them.
Posted by Jan at 2:12 pm