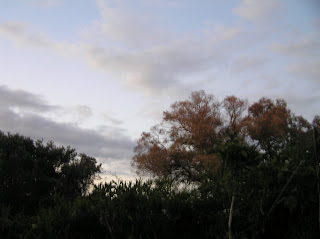 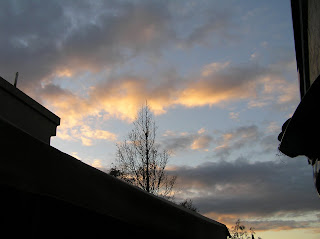 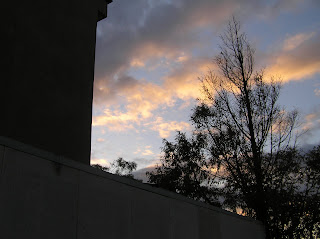 Saturday sky photographed, downloaded and blogged all before 7:30 am on Saturday. The forecast was for mainly cloudy all day, so as I was up before sunrise, I had my camera ready. Being up before sunrise is not my choice, but it's not as bad as it sounds. Sunrise here at the moment is almost 7:00 am. I was awake at 5:45, which is late for me. Many mornings, I'm awake and can't go back to sleep at 4:00. I wish my mind would realise that my body does not have to be up then so I have time to catch the 7:13 bus. As the bus stop is 10-15 minutes walk away, 4:00 am is just too early.

It's cool here but not as chilly as yesterday where the temperature outside was 6° when I left home just before 7:00. Colder out west and the coldest morning yet. Appropriate actually as it was the first day of winter officially. We get colder weather after the equinox than before and the days have mainly been mild, far too warm for the time of year.

Now for knitting. I realised I have a week to DIL's birthday. I made the hat from called Hexed. I finished the hexagons months ago.

I took it out yesterday and decided to rip the first hexagon I'd done. It was a good deal bigger than the others. Re-did it and blocked the pieces yesterday. Sewing them together was a pain, as even after blocking there were some differences in size. I wanted all the point to matxh exactly, like a properly done piece of patchwork. However, I had to fudge a bit. I've picked up the stitches around the edge and am almost finished the band. Photos later in the day, probably.

The body of the hat was done in Noro, Silk Garden. Now this is the first time I've used Noro, although I've read much about it. I really did not like it much at all. I found the wool itself was a nuisance to knit, as it sort of twisted and unravelled as I knit. I've never had this happen before, so put it down to the wool rather than my knitting. It's coarse and unpleasant to my fingers and I wonder how the hands were of those knitters who have done large garments in Noro.

It was expensive, although I didn't mind that as it was for a present. DIL likes unusual things and I know she would appreciate Japanese wool and the subtle colour changes. I chose a colour called moss or forest. Can't quite remember and I don''t have the band here. Greys, soft greens, blues and a few other dashes of colour. My tension was fine for the pattern as given and theoretically there was enough in the Noro to do all the hat. I have a few metres left over, but not enough to do the band. I wasn't paying $35 for another ball just for the band, so I spent some time finding a substitute. I bought some Jet from Patons and it tones in wonderfully. Used it for the blanket stitch seams, something else I would do differently another time, and for the band. As I was knitting the band last night, I was rather glad it was in something else than the Noro. Noro band would have been very harsh on the forehead.

So using Noro again is not something I will be rushing to try, even though I liked the colours.

Photos to follow when I've finished.
Posted by Jan at 7:07 am

I've heard that about Noro from several people. some of those same people have tried Cleckheaton Vintage Hues and loved it!