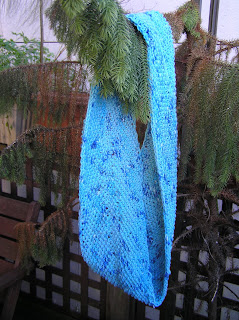 This is the second moebius scarf. A good deal narrower than the first which I made so I could pull it up over my head, this has taken just on one ball of Zarina extrafine merino wool. I wasn't quite sure how much to leave of the ball so I could cast off, but I don't have much left over.

I used the Knitpicks Options needles for most of this. As I said, the points are good, although I don't think they are any better than some of my other needles. However, the cords are great. The nature of the moebius knitting means the cable is coiled around in on itself all the time. When I cast off, I had a look at the cable. There's not a kink in it anywhere. It's perfectly pliable. That to me is really good.

So after lunch today, I took all the bits and pieces out of the packets and have arranged the folder for them.

Sock news... I always have some on the go and I've cast on in some pretty blue Patonyle a pair of Judy Sumner's little shell socks. There are only four rows in the pattern and three of those are garter stitch. It looks quite cute, possibly for a grandaughter whose feet are quite big for her age.

I received quite quickly Charlene Scurch's second book, More Sensational Knitted Socks. It was only about a week since I ordered it and it arrived. I'm sure I didn't pay premium postage for it, but my mind has turned to mush lately with stress, so perhaps I did. It was still cheap, not much over $30 AUS and the first book was very expensive down here. It has some lovely looking patterns in it to try.
Posted by Jan at 4:02 pm