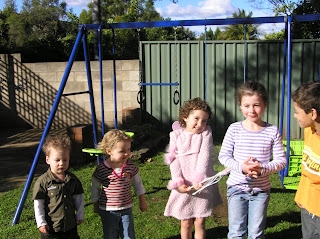 I'm minding two of my grandchildren for the week. It's the first week of two weeks holiday here, and they are attending a KidsGames run by one of my DILs. Miss Six, very soon to be Miss Seven is second from the right, wearing the striped top. Her older cousin, Master Eight, is also staying with me.

Shes been trying to learn to knit for ages. It was no use sending anything home with her as her mother doesn't knit at all. She finally caught on yesterday and is doing fine at the moment. She was thrilled that the needles had a 7 on them because she'll be seven in a few weeks. Doesn't realise that's the size. I've set her up with some Patons jet and about a dozen sitiches. The first in each row is hard for her, but otherwise she's doing fine. I took a photo of the knitting, but my camera and computer are playing no-speaks today, so can't even download it. She really wants to do a pair of socks for her younger brother, the last in the line in the photo. He'll be two in a couple of weeks. He was tired and cranky when this photo was taken and was not pleased about having his photo taken. Little miss in the pink was the birthday girl last Saturday. She's now five and looking forward to school next year.

She holds the needles very awkwardly but is knitting. I'll let her get established before I show her what might be better. I really don't want to get into doing things "the right/wrong way." If it works, fine.

I was horrified to hear an instructor at a class in Sydney city's main yarn etc. shop tell one of her middleaged pupils that she would have to sit in the naughty chair unless she changed to the "correct" way of knitting. "Correct," of course, meant as the instructor saw it. She seemed to me to be making progress and coping.

There is a year between the two youngest children in the photo and they are cousins. Little Miss who is not quite three looks to me to be average size. When we stood Finn who is not yet two next to her, there wasn't much difference. He's a bit slighter, only 2 centimetres shorter, and wears a bigger shoe than she does. Still, his dad is6'5" so he could well be tall.

You have beautiful grandchildren!

I so pleased to read that you don't want to correct her knitting style. I used to teach classes and so often the mothers would pull us aside and ask us to teach the child "how to knit properly". If they're knitting, they're fine! And don't get me started on left handed kids...

Like Andrea, I'm pleased you are allowing your grand-daughter to find her own way. My DD is 21, and has returned to knitting after 13 years absence. She still knits only garter stitch and holds her needles in a different way to me, but she recently completed a complete afghan (40"x70") for Wrap With Love and is knitting squares for another so I just encourage her to keep knitting.

As an adult educator, I can only hope the instructor was joking!