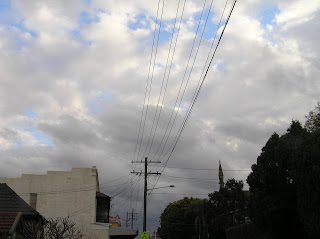 As you can see, quite a lot of cloud today, even though the morning was clear. At the top of the hill near the station, I could see lots of very heavy black cloud to the south. Some more rain would be nice. It's turned quite chilly too, although the morning was quite mild. It's good weather for curling up and knitting. I'm not sure what I will do next.

I have some Romney 5 ply calling to me from its prison in the cedar chest which used to belong to MIL. It's dark brown and there is quite a lot of it. I bought it at an Open Day for the Spinners and Weavers' Guild, NSW. For those in Sydney, their next Open Day is October 13th at the hall of St Paul's Anglican Church, Burwood, a couple of blocks up from the station, readily accessible by public transport. If I go, I'll probably walk there. I do actually have another possible engagement in the Southern Highlands that day. So what will I make? Lots and lots of socks perhaps, or charity hats. I know a couple of organisations working with those on the streets at King's Cross and they are always wanting hats and scarves etc. There is also an Australian Yahoo group knitting for charity. They have special projects and are happy for knitters to donate to their own personal choice of charity.

I've signed up for some google ads which are in the top right of sidebar. They seem discreet and any time I've looked, have all been knitting related. I supposedly get some money when they are clicked but haven't really been following if anybody has looked at them. One click/computer/day if you are interested. I plan on using any income generated from them to buy wool for more charity knitting as I am actually using stash lately. The Zarina in the post below was bought, but I've basically resistd buying wool for many months now and am concentrating on using stash. I'll probably be moving soon and anything less to pack and move is a bonus.

Now I'm off to make cheesey cauliflower soup from a recipe in the Better Homes and Garden Diabetic Magazine, latest issue. My husband is diabetic, diagnosed about 18 -20 months ago with Type II. Good weather for soup.

Update on the soup
Very yummy. I make a lot of soup and have done so for many years. This one is a keeper. Onion, some potato, half a small cauliflower. Cook in stock and either mash or use a stick blender on it.pepper and salt to taste. Just before serving, I stirred in some good, very grainy reggiano cheese, some finely chopped red capsicum, and some parsley which had been growing in the garden just a few minutes before. The soup was creamy without having had cream added and the cheese gave it an interesting flavour without being distinctly "cheese." My soup was an adaptation of the recipe I saw, and I downsized it. No point in making a recipe for 6-8 when there are only two here.

I might try this at the small canteen I run. I make a very large pot of soup every day, usually vegetarian and it's hard to come up with something original for a change. Soup there runs from Easter till the end of September, so it's quite a few times i make it. I make it vegetarian to suit people and then add meat balls etc for those who like their meat. I also have to avoid gluten so don't thicken it except sometimes with arrowroot, rather than cornflour, as some brands are not gluten free.
Posted by Jan at 5:03 pm

I'm a member of that Yahoo group - are you a member too?

Your Odessa hat looks good; I'm sure Wesley was reluctant to take it off! LOL