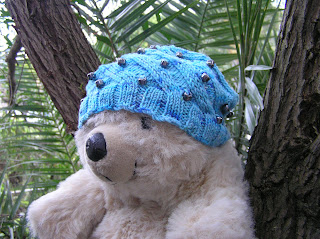 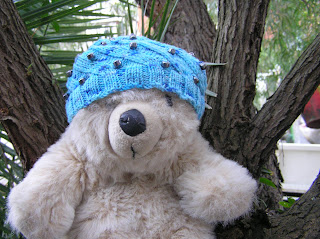 Here is Wesley , the bear, modelling my latest Odessa hat. I made about five or six of these last year, and the beads you can see here were bought for the the first hat last year. Leftovers. They have a metallic sheen to them and look OK on the hat, even though they are grey. Hat itself is basically an aqua.

The wool is Zarina which is finer than the pattern says, but it has turned out OK. I like the wool to knit, it's soft and easy to manage. Needles were 3.5 mm for the ribbing and 4 mm for the hat. I put the beads on individually using a crochet hook. They are quite heavy and the wool is soft. I really didn't want to be pulling all the wool through the beads. The pattern suggests placing a bed every sixth row. Because I used finer, lighter wool, I increased the spacing to 10 rows which I think is fine. Here it is , flat on teh fence n the late afternoon light. it was a beautiful morning but a change came through about 11:00 am and the sky went grey, with lots and lots of clouds. The picture was taken at 4:30, and although it's getting lighter longer now, today has been quite dark.

The hat is just off the needles. I have woven in the ends, but absolutely no blocking has been done. I was in a hurry to get a photo taken.
Posted by Jan at 4:48 pm

I'm not quite sure what the etiquette is on these knitting blogs, but I was admiring your Odessa hat and was wondering where the pattern came from. Or is it not polite to ask ????? I'm just getting interested in knitting again after a 10 year foray into embroidery and am finding it very relaxing.

Odessa comes from http://www.magknits.com/feb06/patterns/odessa.htm Googling pattern names + pattern will often give you the site if not originally given. I was being lazy but gave it several times when i did these last year. Sorry.