saturday sky (not) and some photos

At 6:00 am, just after sunrise here, I went to take some photos in the early morning light. The battery on my camera was completely flat. I have an enormous memory card in the camera and can take several thousand photos on it. I forget to check the battery. It took several hours to recharge, it must have meant it when it said the battery was completely flat, and by that time the light had changed dramatically. No soft early morning glow. Heavy, thick, very dark grey clouds covered the sky and I just could not make myself take another Saturday sky looking like that. 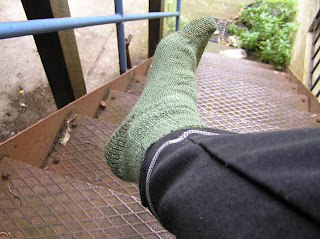 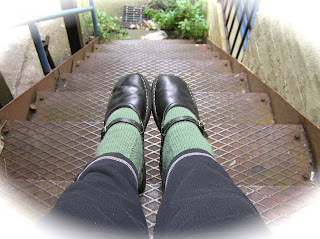 These two photos are the alpaca socks which I did. I love these soft, muted tones, but unfortunately, they don't love me. Make me look like death warmed up, as my mother would say. However, I don't think I'll worry about the colour down on my feet. I bought the alpaca to make my brother a scarf after the death of my sister-in-law three years ago. I think I could see it would take forever to finish, so I frogged it and have had the yarn ever since. I used something else for him. I had both it and the remainder of one of the colours of Wildfoote side by side on the coffee table, when I realised how well they matched. So alpaca for legs and feet, and Wildfoote for ribbing, heels and toes as it is sock wool and more durable than alpaca by itself.

I think I said earlier that I used five dpns to knit these. Each of the moss stitch sections down the inside and outside of the legs went by itself on a needle. No accidental missing to purl! The moss stitch does not show up fantastically well, but that's the nature of the alpaca. It made the socks a bit more interesting to knit than if they had been all stocking stitch. These will be handwash only but that's OK, they're for me. I'd rather not use five needles, but four, but would do it again in similar circumstances. The alpaca makes the socks exceptionally soft and cosy. 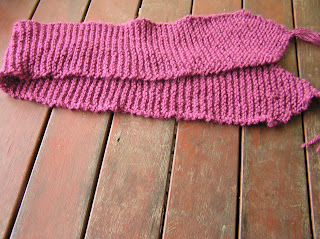 Here's some more alpaca. It's the second ball of the 8 ply I bought at Berrima a couple of weeks ago. This matches the hat shown a few posts down. I wondered what to do with a second ball which I had expected to use on the hat. I cast on a couple of stitches, used garter stitch throughout, increased evenly to eighteen stitches and knit from there. I had estimated how much I would need to do the decreases at the other end, but overestimated, so turned the remainder into tassels. I pulled out the innards of the skein and measured it off, tied a loose slip knot and shoved the rest back inside the ball. Unfortunately too much came out at first, so I had to wind it up and this made a small ball which kept falling out. being 8 ply, it didn't take long to knit and it feels beautiful, very soft and cosy. It really should have been blocked before being photographed. I might even keep it for myself. It's not particularly long, but will be long enough for me. I don't wear scarves a lot and certainly don't use them to make a fashion statement as some of the girls at college do. I've seen some of them lately wearing spaghetti strap tops and then a huge scarf to keep warm. Comfort first is the way I feel! I must be getting old. 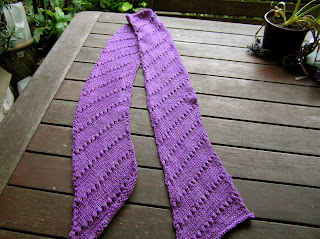 Yet another scarf. This will go in the present box. It's the 8 ply Kmart Homemaker brand, pure wool, unidentified. Cast on forty (I think), stitches. Knit in stocking stitch. On every plain row, increase one in the first stitch and knit the last two stitches of the row together. Eyelets are knitted straight across, but the increases and decreases make it appear as if they are knit on the bias. Colour shown here is reasonably accurate. I prefer my purples to be more like the alpaca scarf, sort of purple/cranberry. Quite a different tone to this. This is the dye I had in the house, so I used it as an experiment. 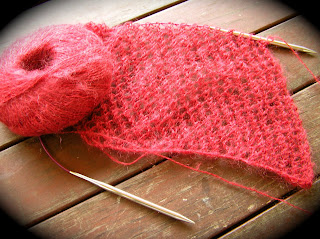 Finally, yet another scarf. This is made in Anny Blatt kid merino with again, forty stitches. There are well over two hundred metres in the ball and I have another one, bought a couple of years ago at a Tapestry Craft sale. I'm using 8 mm needles, the Knitpicks again. I started out doing a cat's paw stitch, but it didn't show too well in the mohair,so out it came and this was done instead.

The colour is a bit washed out here. It's a rich red/brown/orange. A bit like the colour Burnt Sienna in the old fashioned sort of paintset watercolours I had in primary school. The yarn is lovely to use, not much thicker than a spider web. It's really windy outside, even on my sheltered deck and I had trouble with the scarf fluttering in the wind. Even with the mohair, the scarf is supersoft with no sign of a prickle.

Speaking of spider webs...I really don't mind spiders at all and rarely kill them. However, it was a bit much when I was up in the dark at 4:30 this morning and a spider web caught in my hair in the hall outside the bathroom. I could still feel bits some hours later, even after pulling at it and brushing my hair a couple of times. I live in a very old house and it's just about impossible to eliminate spiders and insects from every nook and cranny of the building. I wonder if this was a hint that it's spring time down here and I need to spend my week's holiday spring cleaning? I hope not, because I will do some, but don't intend to let it monopolise my week.

Mum is home from the hospital and feeling better. She has to see her GP on Monday and my sister has been trying to make her an appointment with the specialist. She has now been told she has lymphatic leukemia. She actually does not really sound worried, and I don't think she's kidding herself. I think that she felt so absolutely dreadful while she was sick and then again while she was still in hospital, that anything seems like an anticlimax. I'm sure she thought she was about to die on the spot. She doesn't want to die while her youngest grandson is still in the USA on an exchange visit. He won't be back till the beginning of November, so while she knows the disease is incurable, she feels better. Strange ways our minds work sometimes! Her other grandchildren are adults and she has great grandchildren. This boy was born to my brother and his wife after eighteen years of marriage, so is much younger than the rest of them. My sister-in-law died three years ago when my nephew was on the point of turning eleven.
Posted by Jan at 11:45 am

Good to hear that your mum is feeling a little better.

I love the socks - my favourite colours :-)

Nice socks - I bet the alpaca is lovely to wear. I love the purple scarf - my favourite colour. The red one is my second favourite!