a week I'd rather had never happened 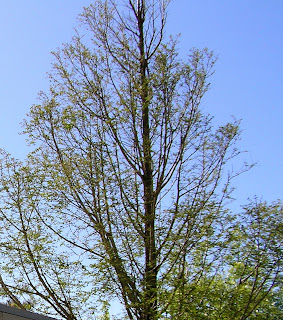 Last weekend started brilliantly. In fact the whole weekend was a great gift. I was away with friends, new and old. Lots of time talking, listening, eating, socialising. Then, as the saying goes, everything blew up. Home as I have known it for some many years is no more. I'm past my use-by date and will be traded in on a new, younger model. Not that she's the first younger model tested at all, but this one has led to my trade in.

Scarcely had that shock registered than my sister rang. Mum, who is 87, very independent and intellectually strong and full of vigour, had had a stomach upset which left her severely dehydrated. The dehydration caused symptoms of incoherence and garbled speech, similar to a stroke, so my sister called an ambulance and Mum was taken to hopsital.

They dealt with the dehydration with a drip and some drugs to stop the vomiting and started many tests including a lumbar puncture which greatly distressed her. It was possible she had meningitis. Blood tests results which came back on Tuesday morning after being done late Monday revealed something much worse. She has leukemia. As yet we have no prognosis, although she has been started on some chemotherapy. An oncology nurse friend says there is some gentle stuff for elderly patients. While she is no longer incoherent, some things do seem to be passing her by. She does not recognise the seriousness of her condition and thinks she can go home today. On the other hand, she can recite all the family birthdays in September and can say what she bought for each. She's worried that she has not yet bought anything for my granddaughter, her great granddaughter, who turns three at the end of the month. 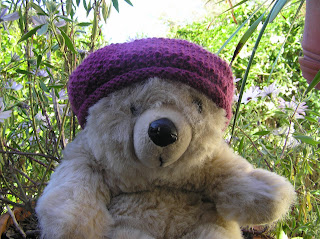 I've been grateful for my knitting in these circumstances. It's all been small stuff which has not taken much thought but which has been calming to knit.
.
The second photo shows Wesley modelling an alpaca hat I did through the week. Fortunately my head is not the same shape as Wesley's and the hat looks better on me than on him! The yarn is gorgeously soft. It was bought at the Alpaca Centre at Berrima on the NSW Southern Highlands. I paid extra to buy the all Australian alpaca yarn, rather than the import from Peru. The Peruvian yarn had suggested needle size and tension on the ball band. It also had a yardage shown of 100 yards. Now, as it came in both 5 ply and 8 ply and both said 100 yards for 50 grams, that seemed a bit strange. However, it was an attempt. Other than a name, Coolaroo Alpaca 8 ply, the Australian product had nothing like that on the label. No needles, no tension and no yardage. I mentioned this to the people in the alpaca centre and although one seemed to be a boss of some sort, it meant nothing and they could not see why I asked about it. Because of the lack of information, I bought two balls. The hat has quite a bit of stocking stitch rolled for an edge, a panel of moss stitch and then stocking stitch for the decreases. I finished it in one ball with about 8" left over. So what do I do with one ball of leftover alpaca of uncertain yardage? I could do another hat as a gift but would have to make sure I gave it to someone who would treat it carefully and not felt it.

Top picture is Saturday sky today, a beautiful spring day. It looks more cheerful than I feel at the moment.

Othr projects have been a simple diagonal drape scarf. Stocking stitch. Every plain row increase one stitch at the beginning of the row and knit last two stitches together. It's done in white homebrand wool from Kmart which was some ridiculous price for 100 grams. But white? Whatever was I thinking of. I'll probably dye it, but no idea yet of the colour to choose. I've also nearly finished the alpaca socks with heels and toes of the Wildfoote.

So all simple stuff which has allowed me to knit meditatively without having to pay much attention to a pattern. I find knitting very calming and that effect has certainly been needed this week. The family has closed ranks around mum and particularly around me as I try to deal with this double blow. My sons have been amazing and and my DILs have been caring and gone out of their way to be helpful and compassionate. I know they are all hurting too as things have come to light which show a great deal of hypocrisy towards them. Enough said.

I'm a christian and pray regularly. Knitting has helped in meditation. I also at times use Anglican prayer beads as an aid to prayer. Touching each beads helps me concentrate. I pray both set things like the Lord's prayer and the Creed and Psalms as well as my own words. This is a difference to a rosary. While I was knitting this hat, I found myself using the stitches like the beads to help me concentrate on my prayer. I'd really appreciate it if those of you who pray could pray for both me and my mum and our family at this time. I have a strong sense of peace and calm for myself. I do not know particulars of where I will live etc but strangely am not worried. Mum has had a long, full life but leukemia is horrid.
Posted by Jan at 10:09 am

Oh, Jan, that's just too much all at once, isn't it? You and your mum and your family are in my thoughts. I find knitting to be comforting, too, and so much better for me than most anything else.
xo

I'm sorry it's all gone to bits at once, Jan. You're in my thoughts.

Oh Jan, a double whammy. May God wrap you in His arms and carry you through this time.

Your post was very moving - thanks for being so honest. I am also a Christian and find knitting conducive to prayer. I will be praying for you and your mum.

I'm so sorry to hear of everything that has happened at once. I will be praying for you, your mother and your family. Knitting and prayer go very well together. In the midst of this storm, may you find the peace that passes all understanding.

People should read this.