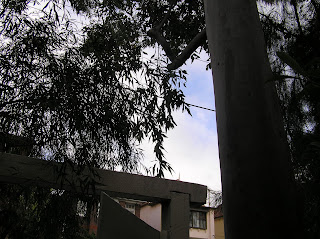 First, a couple of photos of Saturday sky. These were taken out both the front and back of my house. We face northeast at the back and the light and sky are often totally different to out the front. 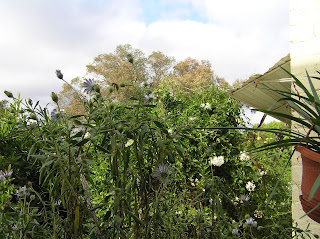 I'll probably be moving soon, so am taking photos of all sorts of bits and pieces. This is more sky and the flowering star jasmine. It's actually intertwined with a beautiful creamy briar rose which has grown enormously in a few years. Photo looks south east. The last week has been beautiful, although far too warm for the time of year. Today there is a change on the way and the clouds are probably the first sign of that. 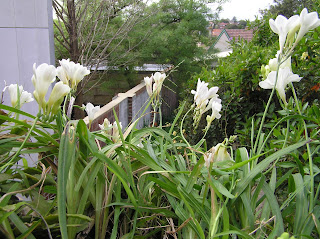 I have several tubs of freesias, a long time favourite flower. I also like sweet peas but haven't planted any this year and remember fondly the enormous deep purple violets from the neighbour's house where my parents lived at Lawson. All flowers with a beautiful perfume. When I come downstairs in the morning, I can smell the perfume from the freesias which wafts in th kitchen window. This week it has been joined by a bowl of hyacinths which were a birthday present to me from my brother. Sadly, those flowers are now almost dead and the perfume is faint. Just a lingering trace. Sad, but life and somewhat typical of my own life at the moment.

I've actually done a few hats but have given them away before I took photos. 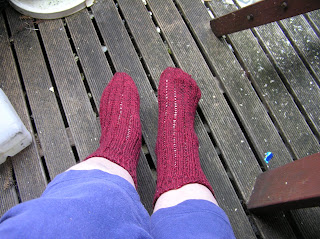 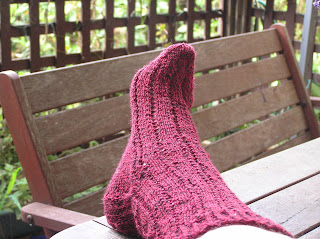 Here are the wildfoote socks finished. A strong contrast with the white legs which haven't seen the sun all winter! This is a very simple pattern which was done on a five stitch repeat around the sixty stitches each round. I was concerned that it seemed to have begun to spiral on the bias as I knitted them, but it can't be seen when wearing so it was probably the way I had the stitches and needles placed. I did have one pattern with a lot of lacy knit 2 together patterns begin to spiral. The pattern reminds me of ladders.

I used a heel flap with these, 28 stitches for the flap and 28 rows. The extra two stitches became a purl edge to the pattern down the instep.

Some years ago, I bought some alpaca to make my brother a scarf after his wife died. I was having a lot of trouble with the arthritis in my hands at the time, and they did not like the alpaca which has little elasticity, if any. I've tried a few things and frogged each time. I have quite a bit of both the green and red Wildfoote left after socks for me, even with longish cuffs. I realised the alpaca and the green Wildfoote are a perfect match, so I've started some more socks. Wildfoote for ribbing, heels and toes. The alpaca is blissfully soft, so I've used sockwool for the toes and heels, hoping it will wear well. Handwash only for these, I think. I started them on Strathfield station yesterday while waiting for a train to Woy Woy to see son and DIL who cuts my hair for me. It was long overdue yesterday and I'm sure I could have made a pair of socks from the clippings on the floor! Well, perhaps, not quite, but it felt like that. I've now done a short row heel and am just about to start the foot on the first sock.
Posted by Jan at 9:10 am