a ripping good time was had

My little Brittany birch dpns have been running hot the last couple of weeks, so I thought I would give them and my hands a break and knit something thicker. I looked around and found some machine wash 8 ply Cleckheaton. Decided to use the vintage plastic(?) needles I found at St Vinnies.

I cast on 48 stitches, thinking that the thick wool and big needles would make for a quick knit. However, the needles kept splitting the wool and driving me crazy. I persevered and got past the ribbing. I worked three repeats of a small chevron pattern and had a good look. The wool is fairly loosely spun and plied and the pattern didn't stand out.

So I ripped it back to the ribbing.

Gave up on the plastic dpns. Not only were they splitting the wool, but they need to be cut down and re-sharpened. the points were catching in my sleeves after using the tiny birch needles.

So I ripped it back to the ribbing again, not as far back as the first time.

Looked for some metal needles but could not find a full set in either 3.0 mm or 3.25 mm in my accumulation on the coffee table. I suppose I might have had more upstairs but I was lazy.

Got out the Knitpicks options and set up for magic loop which I often use on hats. Found I did not like the length of the cable I had chosen so swapped the cable over and set off again. Still did not like socks and magic loop.

So I ripped it completely out, right back to the very beginning.

Now I've just finished another sock for youngest grandchild in an attempt to use up a lot of bits and pieces. It looks good but it was a real pain to finish off all the ends from the stripes. It's dark now, so a photo tomorrow. 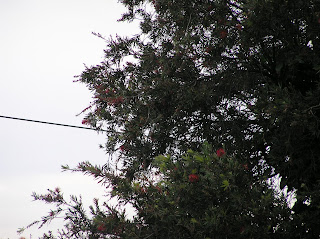 Rain, rain and thunderstorms. That was what was behind this Saturday sky. It was lovely to hear and more rain is forecast for all the week. I hope the forecasters are more accurate than they have been lately.
Posted by Jan at 7:06 pm