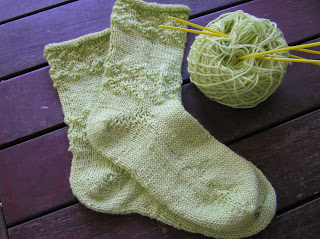 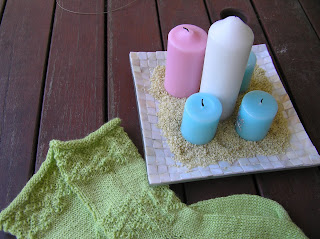 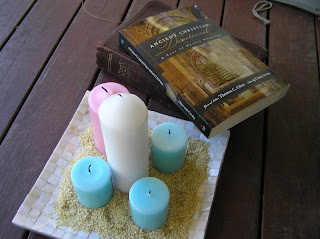 Here is another pair done in the Bendigo celery colour. The pattern is a set of vertical zigzags, then stocking stitch and then more zigzags. They don't stand out too well in the photos, and I think I would put a couple of purls between them if I did them again. Perhaps that would help.

As can be seen from the photo, there was still some wool left after two pairs of adult socks. As this was bought on sale, it's making for cheap socks. Of course, that's materials only, but I'm not into knitting for money. Too much stress and pressure. I'll probably keep both pairs. I'll handwash mine, although it is machine washable. It doesn't take long and I save up the handwash socks till there are a few pairs. Others, from "proper" sock wool, get thrown in the machine and often are dried by machine too. I've had no problems ever. And just remember, once upon a time... all socks were made out of ordinary wool, even hand-spun. None of this adding something in for wear like nylon.

The candles are my take on an old tradition of an Advent wreath for the season before Christmas. Advent starts on the fourth Sunday before Christmas Day. A candle is lit on each Sunday, adding to the previous week. Then the larger one is also lit for Christmas. It stands for Christ. I like the sense of connection with ancient tradition and my day. Not just my day, but I'm part of a much larger whole. I think there's often a bit too much stress on individualism today. My devotional book of commentary can also be seen. It has quotes from writers centuries old, about the first five centuries AD.

Actually, this is tied in with my love of knitting. It's an old craft, centuries old. I like using old patterns and have found some great books in op shops. Vintage needles are another favourite thing of mine. I sit and think things over while the needles move, expressing creativity and concern for others.
Posted by Jan at 3:57 pm

Just wanted to say how lovely both the Celery sock pairs are and The Pink socks too, really nice!!!