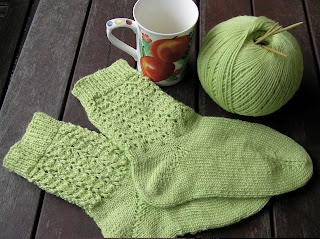 These are my celery socks, so-called because not only is that the name of the Bendigo wool, but it really is, IRL, the colour of a stalk of celery. This is 5 ply and feels a firm fabric. Pattern is just a simple stem pattern with knit 2 together and an SSK in reverse positions to the normally expected so the leaf faces out a bit. Six stitches and four rows, very easy. As can be seen in the photo, there is still quite a bit of wool left in the big ball.

They've taken me a while to finish. I ripped out an almost completed raspberry swirl ice-cream sock and am about to start another pattern with that. Then I was away for about a week on a much needed break. Technically, I was cat and house sitting for #1 son, but I didn't spend much time sitting around knitting. What knitting I did was a shawl from some more of the wool from Bendigo. I took out some tension and aggression trimming some rampant wisteria in the garden he and DIL have just taken over.

Colour in photo is reasonably correct. The light was not good here, evn though it's the middle of the day. It was raining while I took this.

The men's socks which I made as a present for a longtime friend were gratefully received. His mum was a knitter but she died some years ago. During one meeting, I had been surreptitiously staring at his feet to try to guess the size. it worked and they fit well. I don't know if I mentioned it, but the camera does sometimes lie. The legs are a good deal longer than they appear in the photo. I think he appreciated the gift.
Posted by Jan at 1:56 pm

I think these socks are absolutely terrific. I think seeing them finished, I have an inkling to go buy myself some celery coloured wool now. Gorgeous!