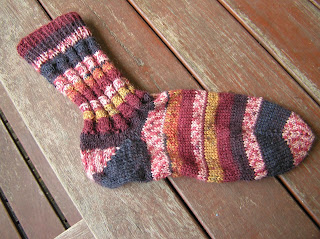 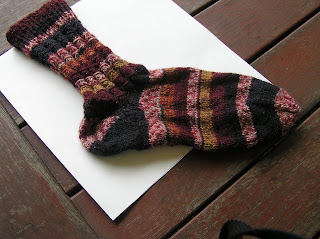 Another half a pair this week so far. They are from Sirdar Town and Country sock wool bought on sale at Tapestry Craft. Alas and alack, this brand of sock wool has been discontinued. I have made other socks from this and really like it. Neither of the two pictures is really indicative of the colour which is somewhere in between . It was raining this morning when I took these, and somewhat dark, so I used the paper to reflect some light. Didn't really work.

The wool is soft to knit and I love these colours. My other pairs from similar wool have worn really well and I'm disappointed it's no longer being made. I bought this colour, just because of the brand but am really pleased with the way it's knitted up.

Will I make them identical or fraternal twins? Not sure. In all that sock, there are only two and a half colour repeats. That's a lot of wool to unwind to find the same starting point. The repeat goes all the way down to the thinnish mustard stripe. I've done the pattern before but made the foot part plain this time. It has pulled in on the leg, but is really very stretchy and fits nicely.

I wasn't planning on doing socks this week, but spent a couple of days babysitting young granddaughters while their mum was out SESing in western Sydney after the last big destructive storm on Sunday afternoon. She spent most of Sunday night on one roof where almost every tile had been smashed. Since then, she's been out another two days and another night. She's exhausted. Socks were something I could easily grab on the way out there and also something that did not need too much concentration.

Later:
Have just investigated the second ball to see where the stripes start. Wouldn't you know it! Just past the beginning of the sequence already done in the first sock. so I think these will be fraternal socks.

Later again:
Breaking news! Have look for lots of Christmas gifts and other free patterns. Set up like an Advent calendar, one heart opens each day with a free pattern. Socks, bootees, wristwarmers and lots more.
Posted by Jan at 8:56 am

Just catching up... I made these socks too! They are among my favourites.