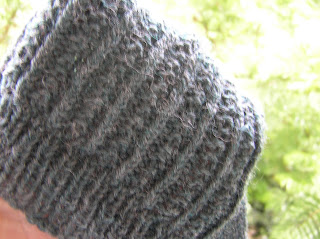 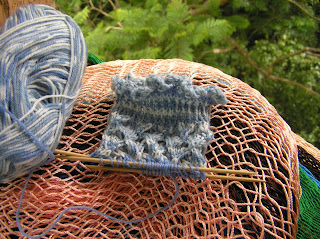 I have been doing some knitting. One sock finished in stash Heirloom Argyll bought several years ago. The colour has not turned out well. It's much more of a teal blue with flashes of dark green in it. The pictures of the completed sock on the white balcony edge showed up almost black. this is much too light. I can't win either way.

Four stitch repeat, two rows in pattern. Not much but this took a long time. Perhaps it was the way I felt. Knitting provided some relief from my emotions and some unpleasant email exchanges, but it was a slow knit.

In contrast, the light blue Patonyle was started last night. It's the eight row pattern from More Sensational Knitted Socks. I started this sock as my eyes needed some light relief from the much darker Argyll. This is indeed quick. I seem to remember that the pattern is repeated eight times before heel. I've done two repeats already in a short time. I added teh frill as a bit of fun. Easy to do and to adapt. Cast on twice s many stitches as needed. Knit two rows. On third row knit in rib of choice, but knit two stitches together every time, thus bringing number of stitches back to what is needed. 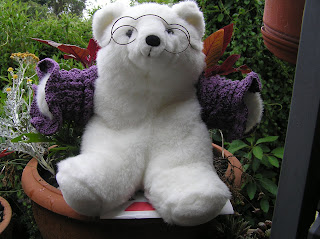 I've made frills on the edge of sleeves of little granddaughters shrugs in the opposite manner. They were knitted top down. At end of sleeve, knit one, make one all along row. Knit a couple of rows and cast off.This photo, taken at the end of 2006, shows Susannah Wesley modelling one of the three shrugs I made then. The frill done at the end of the sleeves can easily be seen. This shrug, and the other two were done in Heirloom Breeze, a mix of wool, cotton and a tiny bit of lycra. All the shrugs still fit granddaughters, thanks to the lycra.

And doesn't time fly past! Little miss in the sidebar photo of the pinwheel jacket from Elann starts big school in a few weeks. She's very much looking forward to it but her counting, maths skills and reading are already quite advanced for someone not at school yet. More like first class than just starting kindergarten
Posted by Jan at 11:19 am

Sorry you are missing your kitties Jan. This is a hard time for you. Been there, done that. Take time to look after yourself. It might not get better for a while, but it will be easier in the end.

Well done on winning the Christmas knitting comp Jan! You deserve it!