At last some photos with co-operation from Blogger! I love the crepe myrtle bark and its beautiful colours and textures. The lavender overhangs some steps. It was quite dangerous, taking up almost half the step area. They are bad enough already, rather steep. I pruned it back a while ago and cut out a lot of the deadwood underneath it. I was concerned about doing this as lavender can be a bit temperamental in Sydney. Then I thought about the excessive rain we have had. That too could cause it to curl up its toes. Instead it is thriving! New flowers and new growth. 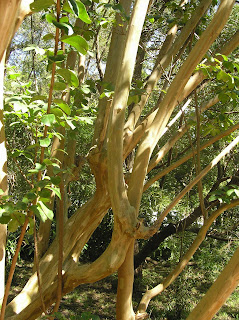 Instead of garden photos, perhaps I should have shown you a few frog ponds. I am back at work and feeling ambivalent about staying there. I really think I need a few more weeks of testing the waters, so to speak. Again the students are lovely and friendly, but I had let stock run down at the end of last year. As a result, I've been spending heaps to build things back up and this has obviously cut into my takings. Add in a very early leave time in the morning and a longish walk to the station and I am not all that keen on continuing, particularly when the walk seems twice as long home in the afternoon heat.

I'm also still sore and bruised from a nasty fall just over a week ago on the way to the station in the morning. I turned the corner off the Pacific Highway and walked down a slight slope. There had been a massive storm overnight which had washed a lot of dirt from a construction site onto the footpath. My foot slid away from me on the slop and there was nothing to grab. I landed flat on my back on teh side of teh path in about six inches of mud. I pulled a couple of muscles in my left thigh and have some spectacular bruises from it. Rang DIL and woke her and my son. They came and picked me up in the car. It was before 6:30 and there was absolutely no one around to help me. 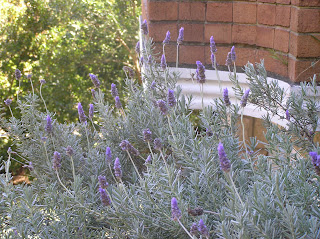 I had left some wool and some biggish dpns there over the christmas break. I have cast on several things without much enthusiasm. Scarves mostly. Each of them has been frogged. Last week, I brought the lot home in disgust.

I have done some baby booties which I think I've mentioned and a marching hat. I've also done a long multi-directional scarf by Iris Schrier. I've done several of these before and obtained the pattern when i joined the Yahoo group she ran a couple of years ago. I haven't yet photographed it as it needs blocking. My pins are somewhere in the plastic tote boxes I moved. I just don't know which one and I'm thinking it might be easier to buy a couple of new containers of them than to search.

Another scarf was started here but given up in boredom. Let's just say it involved knitting Icord for a couple of metres several times and then plaiting those cords together. B_O_R_I_N_G!! Very. I thought I could cope but decided I couldn't.

Looks like Blogger doesn't want to upload photos. I'll give it one more try and then try tomorrow perhaps. I keep getting a notice about google server error. And yet again!
Posted by Jan at 7:44 pm

You are having a rotten time at the moment! I hope the stiffness and bruising doesn't last too long. All the best.