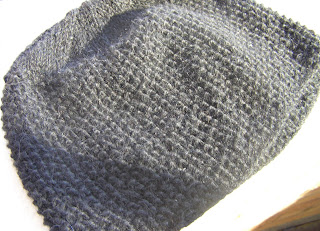 This is far from a good photo, but I'm not sure I can get anything better. It's a hat I've been promising my son for ages. Now it's arrived, he loves it. The colour here is nothing like what it really is. This looks a steely grey. It's actually Bendigo Mills 8 ply pure alpaca, as black as black. Very black indeed. I originally started with a hat with a rolled edge. He would prefer a skull cap style. So I ripped it back. As I didn't have a pattern but was winging it, it was a bit of guesswork. I cast on 99 stitches with 4 mm needles. Hmmm, this was a bit sloppy, so out that came too. I used 87 stitches on this one for the moss stitch and added one extra when I started the stocking stitch cap part to the head. I think I could probably have gone down a bit more but he likes it as it is. He spends a lot of time at the computer for work and this is a very cold house, so he's worn it all afternoon.

DIL likes it too, but would like a deep blue yarn blanket stitched around the edge. I can imagine the finish she's after and think it would look good but son is happy with it, just as it is. We'll see. Somehow, I think she'll get her way.

I've started some more baby socks, this time in some solid pale pink Opal which I bought for my granddaughters who all luuuurve pink. Nothing fancy, just a couple of rows of eyelets about 10 rows apart. I still have the first pair of socks I made for myself many years ago. They've had lots of wear and get no special treatment for washing. Or drying for that matter. They are Opal, so it wears well but I do not like knitting it at all. It feels like string to my fingers. I've made quite a few other pairs from Opal as well, but it still feels like string.

I seem to be stuck at the moment doing small things. I think this is because I am pleased to see quickly finished objects. Another process has started in my life and this promises to be long and drawn out. I hadn't thought about it till I started to write, but feel that this is probably behind my several pairs of baby socks, a couple of scarves, a hat etc. I can see something finished without frustration and banging my head against a wall. Then I remember a saying told me when #1 son was a baby, this too shall pass.
Posted by Jan at 9:24 pm

I, too, love knitting small things between big projects, knitted or otherwise.
All the best for the upcoming "long and drawn out" process.