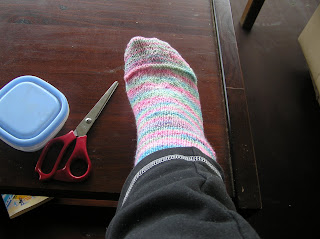 I've been away for a few days, up on the mid north coast, minding my mother while my sister, with whom she lives, had a few days away. Mum turned 88 when I was there so I cooked her a special meal. Who knows whether she will see 89 as she has leukemia and has lost over 20 kg without trying since last September. Winter and its germs may well be dangerous for her. I took several lots of knitting, but as always it was too much. These pink sock are called my travel socks. I had a small amount done of the first one when i left and finished it on the way up. I was supposed to go by train, the XPT, both ways and had seats booked. However, the train to go up metamorphosed into a long-distance coach. It was packed and I was right up near the back for a couple of hours. Fortunately when we stopped for lunch, a couple got off and I took their seat for the remainder of the trip. Total trip was about 5.5 hours. I spent most of the time knitting and finished the sock. As you can see, there is a short row toe as well as heel. I've done these before, but always grafted the toe back to the body of the sock. I am odd, LOL, and actually quite enjoy grafting. However, while I had taken darning needles etc and scissors, they were packed in my luggage so I did a three needle bindoff and then darned the ends in later. The second sock was just started when I got on the train yesterday about 11:00 am. This time, it really was a train and I had booked a first class seat as it wasn't much more expensive than economy. My carriage had few people in it and my seat was a good window position. I watched the scenery and knitted. The views were beautiful as we travelled up into the mountains to Gloucester and then along to Dungog. It was damp and mostly grey, but I could see green paddocks and cattle in good condition. A winding creek with a good deal of water was close for most of the time and the mountains were behind. Even allowing time out for lunch, I made good progress and finished the second sock in a few hours. I put them on this morning as they were still sitting on my desk as I hadn't put things away after unpacking. It's grey, cold and wet here today. The wool is from Live2Knit and is 4 ply machine washable merino. Colour is called Monet. 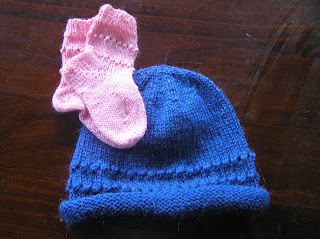 This hat is made from Bendigo Mills blend of merino,mohair and alpaca. It's the same wool as I made a couple of panta headbands shown earlier. It's nowhere near this colour, being much more muted and more teal blue. It is for a gift and I was planning on posting it to South Australia tomorrow. However, I have just learnt that the person for whom it is intended is coming to Sydney next week, so I'll be able to give it to her.

The socks are the third pair of baby socks for a little person who has had an unfortunate start to life. Hmmm, I think I see a quick and easy pattern repeat in the socks and hat! These are made from a 100 gm ball of Opal sock wool that I bought ages ago to make socks for little granddaughters. I'm not really a pink person and this ball does not seem to have gone down very much, despite having been used several times. 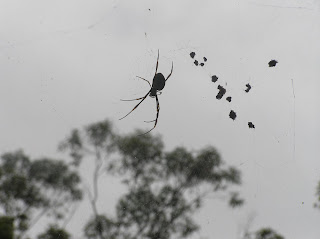 Lastly, just because I can. This golden orb spider has a web outside one of my bedroom windows. There are golden strips on its legs but they don't show in this grey light. The blobs are its victims, all trussed up in spun web. It hangs upside down and waits for bees from the roof hive next door to fall into its trap. I don't mind spiders at all and there is no way this can get inside. It was close to another window right behind my bed, but I accidentally destroyed quite a bit of its web when I replaced a gauze screen which had fallen from that window. It moved around the corner and made a new web.
Posted by Jan at 11:38 am

A coach manifesting as train is not a good thing - ask my elderly parents who had to go both ways Sydney-Bingara last year; it's a ten-hour trip with only two stops: Tamworth [briefly] then Muswellbrook for lunch!

My favourtite part of the train trip up the north coast is between Gosford and Cowan - all those beautiful river views!