I've been contemplating making a felted bag for quite a while. When I saw this beauty, my mind was made up. I even have some of the Cleckheaton Vintage wool, although in a different colourway. Will keep progress posted.. As I knit the base, I keep thinking of possible different stitches for the unfelted part. Sort of an old fashioned embroidery sampler. I have such a sampler and am fascinated by the detail in it. It's in the form of a dolls apron and has probably two dozen different stitches including hemstitching on it. All done in superfine silk thread on fine lawn. Unfortunately, its condition has suffered over the years.
Posted by Jan at 8:54 am 1 comment:

Here's a bit of fun from Jigzone A knitting puzzle. This one is in the shape of a map of the USA, but the shape can usually be changed if you would prefer. Link to change the cut is on left. Be careful with the USA layout. There are several tiny pieces which I usually put in at the end. Don't drop them!

I find Jigzone a bit addictive, so need to ration my time there. You can sign up for a daily puzzle to be emailed to you and there is also a link to a knitting blog on the page.

Anyway, here's yarn and needles in a jigsaw.
Posted by Jan at 8:36 am No comments: 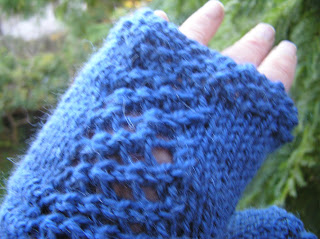 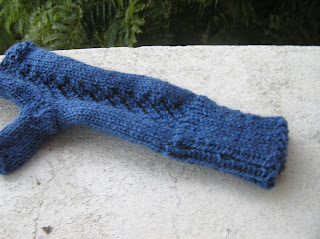 DIL has a birthday coming up in a few weeks. She's been complaining about the cold lately, so I thought another pair of wristwarmers might be part of her present. This wool is Mystique from Bendigo Mills. Merino, mohair and alpaca. I had already made her a panta headband from it, so chose this to match. The colour is really a slate blue, more muted than shows here.

The second photo is pretty bad as they haven't been blocked, so it's curled in on itself,but it gives some idea of the size. She's tall, six', and her limbs are made to match. She's very slim, but long legged. Even her hands are long and slim and i wanted the warmers to be cosy. Ribbing, hand part with insertion eyelet lace from my new book, Lace and Eyelet Stitches by Erika Knight and moss stitch around the top. I gave them to her this afternoon and she hasn't yet taken them off after about two hours. She's been sitting still reading, so has had warm hands to hold the book. I've written the pattern up, but need to check it before I post it.
Posted by Jan at 5:41 pm No comments:

another FO but no pictures

I went to dinner last night at #2 son's. It was a longish train trip from here, but I was able to get a through. Just as well. The city platforms where I would normally have changed were packed.

So I packed the latest sock I've been making this week. They are used to train travel as i do them most mornings. I did another short row tow and finished the three needle bind off all bar about six stitches.

These are the quill lace socks from Knitty.. Finished them when I arrived there and they were immediately snaffled by DIL, so no photo. These are an easy knit. Mine were made on four dpns, rather than the two circulars. I'm not fond of ends flapping around and I just adjust the instructions. I used what I ahd hoped would be the very last of a ball of small girl favourite pink Opal, but I still have some left over. It's made granddaughter socks, baby socks and now big girl socks. I find Opal wears very well, but I don't like knitting it as it often feels like string in my arthritic hands. Some of the fingers have been protesting this week. No socks next week, I think but something a bit thicker.
Posted by Jan at 7:40 am No comments: 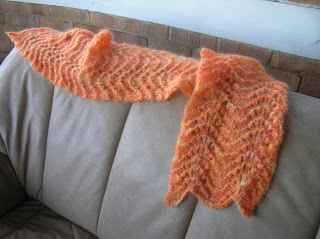 Gelato * is just such an apt name for this colour. It's hand spun and dyed mohair from New Zealand. The label said the equivalent of 12 ply. I think I used a 7 mm circular needle. Needles were put away last week, so I'm not too sure of the size used. It's a simple feather and fan pattern. The whole scarf is whisper soft, airy and light. Actually I had trouble photographing it in the breeze up here on the third floor. I tried hanging it from the jacaranda in arm's reach, but the tree was moving too much and the photo was blurred. There is a lot of orange in the scarf and some gorgeously lemon parts as well. It looks just like citrus gelato. 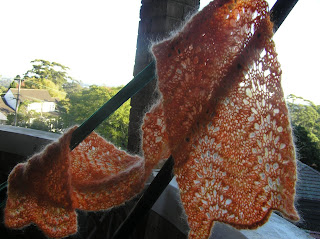 The feather and fan pattern was done on 36 stitches, just two repeats. it's quite a wide scarf and longer than many I have. It's about 2 metres long, although that's not easy to see from the photos.I don't wear scarves much, nor high necked jumpers as they irritate my neck. Not itchy because of the wool, just the fact that something is there. However, this is long enough to wear it a bit loosely around the neck and I'm planning on having it give some zing and zest to a black top I want to wear to a conference on Saturday.

I've had the wool a couple of years. It was bought at Tapestry Craft in one of their June sales. I seem to remember that the yarn cost just over $30 before the sales discount. I decided I wanted something bright and amazingly cheerful. It was particularly easy to wind from the hank. My swift is broken and I couldn't find any chairs here at this new place which I could place the hank around. Finally settled on an old, antique, embroidered firescreen which was just the right size. The hank unwound easily without the slightest trace of a tangle. That's just as well, as the mohair certainly stuck to itself.

* My Apple computer's spellcheck does not know about gelato. It suggested gelatin, (without the "e" on the end,) as a substitute! LOL.
Posted by Jan at 4:33 pm 1 comment: 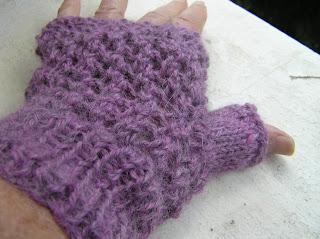 It's been chilly here. No, downright cold in the mornings. The temperature where I now live is about equal to Sydney suburbs like Campbelltown and Richmond. Much lower than the forecast temperature for Sydney which is lower than here. We are up reasonably high.

It was particularly cold on my morning hike to the station last Tuesday. This is May and there's a way to go with winter yet. Morning walks to the station at 6:00 am will be cold.

So I made myself some wristwarmers. These are luxurious on my hands. Pure alpaca, so I'll have to be careful washing them. Rib at the wrist, then the back of the hand has a super simple mesh pattern of four rows, thumb stitches picked up later, and moss stitch around the top. 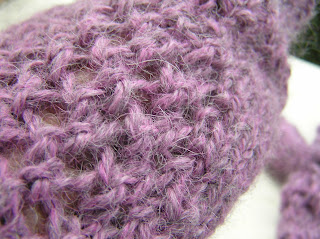 They feel wonderful. Today is windy, but not particularly cold. I didn't want to take them off after taking photos. I can see them getting a lot of use.

The colour of the photo showing the mesh pattern is much more accurate than the first photo. It's alpaca from bendigo mills. Colour is called Briar Rose. It's soft and squishy to knit and I'm happy with them. I undid the moss stitch on the first wristwarmer as it gaped a bit. I made the top of the glove part around the hand several stitches smaller and it now fits nicely.
Posted by Jan at 3:53 pm 2 comments: