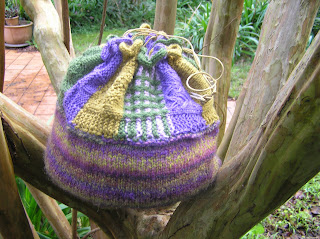 Four photos chosen and I can't upload them! What a pain. OK, so I'll try the slow and painful way which now seems to have worked. One by one, instead of as a group. I really don't like iPhoto, one of the, to me, drawbacks of the Mac. I used to use a legit copy of Photoshop when I had a PC and found it useful, convenient and quick and in line with not only my expectations but also my capabilities. I'm currently investigating photo editing which will run on the Mac. Nothing amazing is needed, I'm not a graphic design person and my skills are definitely verbal rather than visual, but I want something more than the very basic editing capabilities that iPhoto gives. 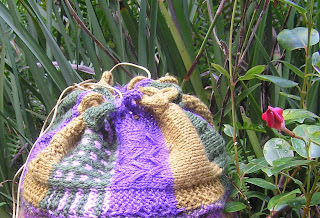 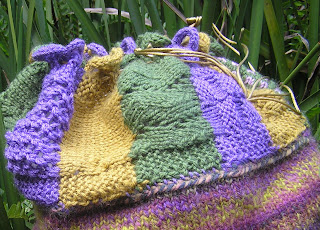 Knitting has been happening. Last year when my life was falling apart, I knitted and knitted. Around a dozen pairs of socks in a few weeks, mostly adult socks, as well as other things. Things have slowed down somewhat this year as I have settled down here with son and DIL, although there is always something on the needles. However, I have a fairly major appointment with my solicitor in a few days and I just realised that the pace of knitting has picked up again. I also realise that when I'm stressed, I change to being someone who concentrates on the process rather than the finished object. I bought some Anny Blatt fine kid mohair in Tapestry Craft's sale. I planned on treating myself to a luxurious scarf, quite long so I could tie it in various ways. I found lots of lacy scarf patterns which I liked and tried many of them. Process, remember? They were undone. Too this, not enough of that, wrong colour for the design. Whatever. I have settled on a very easy mesh lace pattern which seems to suit the yarn. I don't often make much for myself and I'm not really a scarf wearer, but am enjoying the prospect of having this one for myself. It's a bit of "be kind to myself." I've indulged in a couple of knitting books and also some books of a more academic nature from the Uni Co-Op bookshop to which I have belonged almost since it began many years ago. More pampering.

I've made some bed socks for my eldest grandson who wanted them so desperately that he had no colour preferences. He's nine. I've also done several pairs of small socks for a friend's toddler and something for her second child due in October. 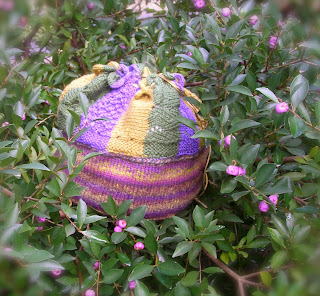 I mentioned a few posts earlier a "yurt bag." I'd been considering a bag when I found the post and decided to try. The bottom is Cleckheaton Vintage Hues, made a bit bigger than the bag which inspired me. I felted it in a pillowslip in the washing machine and then it went through the drier. Son's drier is an enormous commercial gas Kleenmaid drier which has a much gentler action than most of the domestic electric driers. I think I would really like it to have felted a bit more. That's experience for you. I also think I will undo a few bits where I joined the patterned strip to the felted bottom and do them again more carefully.

The pattern strip yarns are all Cleckheaton again, and the purple is a crepe. All 8 ply, as I wanted ease of movement in that part of the bag. I had trouble finding patterns to use and ransacked my stitch books. Some patterns, particularly the lacy ones were gorgeous, but went for thirty or so rows. Most of my sections are 19-21 rows in length. There's a mosaic, several lacy panels including mesh and a zig zag, a couple of slip stitch, a cable, basketweave and plain old stocking stitch. Not only did the rows have to work, but the pattern width was also a limiting factor in my choice.

Around the top I knitted I-cord, nine rows on three stitches for each of the loops which were attached as I knitted. The drawstring cord was a bother. I had nothing here to use which wasn't packed away in a box somewhere in the garage downstairs. I wasn't going exploring. I bought some twisted cotton cord and tried to dye it. It obviously was not pure cotton as it did not shrink at all and didn't take the dye, even with a mordant. So the first time I used the bag, it was threaded with the white cord. Then yesterday, DIL and I made a very late afternoon visit to the fruit market at Gordon. While we were messing around in the temperamental lift in the building, DIL saw some cord in Rubi and Lana's. (The lift has glass walls.) It was obvious they were closing, but I hopped out and ran in. I found this silky but strong cord and bought some. It's great to use, but I'll have to be careful how I carry the bag as it's very thin cord and could well be as nasty to my fingers as plastic shopping bags are. I'll still keep looking.

I've used the bag a couple of times and it's been given some good attention. On the whole, I'm very happy with it. Not least of its good qualities is its warmth! It's been quite cold here, very windy and wet for several days. I sat with the bag on my lap the other day and was glad of an extra layer!
Posted by Jan at 11:28 am

A great interpretation of the Yurt Bag.
The colour work is good and keeps the spirit of the original fun stripy effect.

It's nice to have a small project where you can try out several different stitch patterns, but as you found, the width available can be a limiting factor.

I'm glad you made yours bigger - mine is a bit small.

I will be soon be putting up on my blog and on Ravelry a properly written pattern for this.

Your version is the prettiest bag I've seen so far; the uses of the colors are beautiful. I'm a big fan of Cleckheaton yarns.

Jan it is gorgeous, I love how they all look so different! Love the colours of yours.