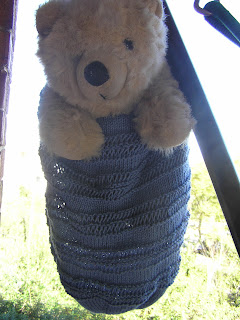 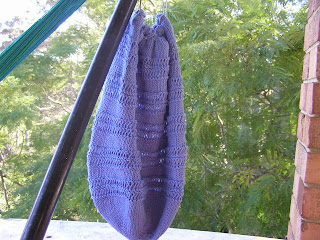 I've been knitting this on and off all week. It's cotton and I find cotton hard on my fingers and wrists. I knitted too long one day and had some nasty swelling on my left wrist, so learnt my lesson and did less at any one time.

The pattern comes from the Inside Loop, an online British magazine. The actual pattern is here. Apparently, Traeth is Welsh for beach. I used Heirloom 8 ply cotton and have about half a ball left from three balls bought from Tapestry Craft. These balls are only 120 metres long, while the British product used is about 200 metres. I used more than the pattern suggested, because I knitted a ribbed handle from top to bottom of the bag. The original has straps to use it as a back pack. I had nothing suitable for straps here and rarely use backpack style bags. Even if there are two straps, I usually use only one and the bag was not the sort to be crammed so full that both straps would be used. The drawstring used came from Rubi and Lana's at Gordon. It really needs toggles or slides and I know I can get these at Paddy Pallins, the camping store in the city. However, Sydney is crammed over full of pilgrims for World Youth Day at the moment. I'll stop off there after work one day next week when hopefully there won't be so many people in the streets.

The bag was easy, but I see I've made a mistake in the decorative dropped stitch section. Between the two dropped stitch rows, there should be one purl, one knit and then another purl row. I can now see I've missed the second purl row on one section. However, I'm not going back now to rip it. I'll be more careful next time.

The blue is quite a soft blue, somewhat like a muted Aussie sky blue. The cotton was easy to knit, once I learned not to do too much at one time. It didn't split and knitted up quickly.

The holes around the top for the drawstring were spaced 14 stitches apart. I had some misgivings about this large spacing but followed the pattern. I was right to feel uneasy. The space was far too big and I found it difficult to draw up neatly. I pulled both drawstrings out and re-threaded them through the knitting at half the spacing. The safety pin I used went through the fabric quite easily and I did not have to go back and make more eyelets.
Posted by Jan at 12:20 pm

It looks good and I am sure no one would notice the "personalisations" on there. Love the colour

The bag looks really good and what a great place for Teddy to hang out on a fine winter's day.

Love the bag! (and the hat and the socks and the yurt -)I turn around and look how busy you've been!