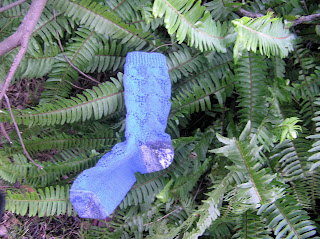 This is really little more than a placeminder of an entry until I can take some photos at the weekend. it's been a week of mall finished objects. One sock of a pair with a fishbone fern leaf pattern on it. I meant to take my knitting today to start the second sock, but forgot as I had a bad headache when I left home. I also left home without my alpaca wristwarmers and and my newly finished neckwarmer. This of course leads to my next paragraph.

The first picture is the fishbone sock on fishbone fern! The wool is Opal Unisolid, bought years ago. I think it was a 100 gm ball and it's made baby socks, several pairs, and several pairs of little boy socks for my youngest grandchild last year. He turned three last week. I wasn't sure how far the wool would go. so divided the remainder by weight and wound two balls. Heels and toes are from scraps of more Opal. I could perhaps have just managed to get either the heel or toe out of the main colour. the pattern comes from the Harmony stitch guide to laces and Eyelets. Again, it was very dark outside, on the verge of rain.

It has been very cold here since the weekend. Cold in Sydney itself, and much colder up here. We had what the weather bureau called "mushy hail" on Sunday afternoon. It looked like snow, felt like snow, played like snow, but apparently wasn't snow. the temperature plummeted when it fell. There was more the next afternoon, although nothing like as much as on the Sunday. I've been out in falling snow and believe me, hail does not fall lightly and swirl in the wind as snow does. Monday and Tuesday were very cold for Sydney, with rain and a biting wind. Today has been cold, but no wind, so it has felt degrees warmer.

So what does one knit when one leaves home by 6;00 am in these conditions? Why neckwarmers of course. I've never been one for things around my neck or high, close collars. However, I've made three neckwarmers in the last few days and appreciate them very much. These are short scarves knitted as a scarf, narrow side up, but joined in a circle just allowing it to be pulled on over the head. Super cosy and very much appreciated this week. One was a black alpaca, with a drop stitch pattern. The pattern really does not show in the black but was a means to an end in knitting plain black for some length. 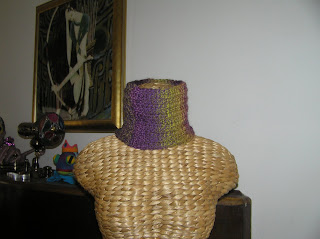 Another was a merino/mohair mix in a lacy rib pattern and wide for a scarf of this nature. The third was done in some leftover 12 ply Cleckheaton Vintage Hues and a one row pattern from the Yarn Harlot. This makes a totally reversible pattern, is very easy and it looks good too. 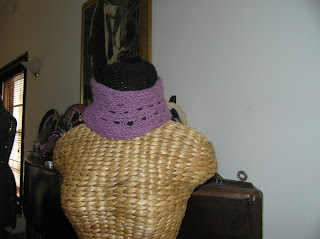 Every day I've had one of these on under my well-used but still good quilted silk jacket. The neckwarmer has been pulled up well and the jacket collar has been turned up, buttoned and the drawer tie has been done up too. They've been marvellous in keeping out the draughts. The first two needed an extra tuck as I'd made them a bit loose. The 12 ply is just the right size. It goes over my head but is still snug on my neck. The beauty of these warmers is that, unlike a short scarf wrapped around the neck, there are no loose ends to wriggle loose and let icy blasts under my ears.

Don't you just love my model? DIL has several dummies, but I really like this particular one. The day was very grey but the flash did not produce good photos at all. these are a bit hard to see too. Model feels the cold and is wearing two neckwarmers in one picture, the black alpaca and the alpaca lacy rib. This one matches my fingerless gloves, made some time ago and now used everyday.

The Cleckheaton Vintage hues is also shown. This is 12 ply and needs to be worn by itself. Model is standing in front of our beautiful Art deco fire place. I could not take a picture of that in its glory as DIL is currently re-arranging lounge room and a lounge is in front of it. It's curved and has a marquetry front with hundreds, probably thousands of small inlaid pieces of wood. If you look closely, you may see a strange object on the mantelpiece. It's a handmade kaleidoscope, made of copper and glass by a retired naval captain. there are three discs with different patterns of coloured glass. these discs are turned by a small wooden knob. DIL bought it as a present for my son some year ago.
Posted by Jan at 3:29 pm