almost anything but knitting 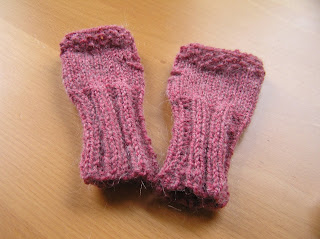 Hopefully I'll get some photos up soon. Finished objects? Two pairs of wristwarmers for little granddaughters. One totally in some leftover Caressa and the other pair for Miss Three in Caressa and some toning pink scraps I had. I wanted them to be quite different so there could be no quarreling about ownership. I need to darn in ends on these. I'm about to finish some bed socks for the girls' big brother. An entirely unexciting knit in some grey tweedy stuff, pure wool from L*ncraft. I bought the wool for socks, but there wasn't much in each ball. However, Andrew asked for bedsocks, so used it up here.

It was my birthday yesterday and it really was a mixed bag. I accidentally left my phone at home so found sons had all rung through the day but I had missed speaking to them. I went to work but felt quite ill. I've already missed all four days last week when I had the 'flu and I had Tuesday off this week as I felt really ill again. No work means no pay for me as I work for myself. I've been complaining about a mushy brain and poor concentration. I felt bad yesterday so finally went to the doctor. All explained. He diagnosed pneumonia! I apparently still have quite a high temperature and have been trying to live with that for days. I'm now on some powerful tablets which he insisted I had to absolutely take every single tablet. I know people who leave off antibiotics when they begin to feel better. I'm not one of them but he was taking no chances. i hadn't seen this doctor before so he didn't know me. However, I knew I really was sick and just had to see one, any one at all. Pneumonia on my birthday!

Came home to find son and daughter were delayed and I had to get dinner. Not impressed. I waited until they returned because I wanted to fit in a second dose. 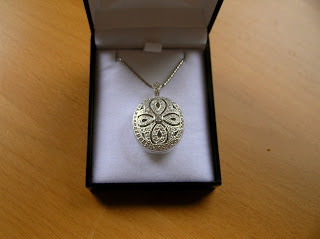 Then the best part of the day. I pass a well established jeweller's shop on my way to bus in Druitt Street each morning from the train. I've bought a few watches there for people and actually have some jewellery given me years ago. Some months ago, I saw in the window an expensive pendant which I loved. I had the money at the time but being conservative, I finally decided I wouldn't buy it for myself. I had told DIL about it and had put it totally out of my mind. I thought about it just a few days ago and looked in the window. All the other designs were there, but this one was gone. I was disappointed but not upset as I had reconciled myself to not buying it. When DIL and son finally arrived home, she handed me a small packet. Yep, you guessed it. She had gone and bought it months ago. I was really touched. It was quite expensive and she had bought it at a time when they were under quite considerable financial stress because of some bad decisions made by others, not themselves, and because their house was on the market a long time.

So the day ended better than it started.

More update from Friday morning: DIL took me to college because of a delivery which had to be paid for and which I could not cancel. I did no work, just hung around for an hour. However, just as we were getting in the car to go there, her phone rang. #2 son had ridden his bike to work, pushbike that is. He'd been sideswiped by a truck and was in Liverpool Hospital. For those not in the know, Liverpool has a poor reputation in Sydney. Very poor. What's more, not even his wife could find out how he was. Very fortunately, there has been no serious damage done. He has no recollection of what happened but apparently was knocked sideways off the bike. He'll be very bruised, sore and sorry for himself for a while, but is alive and no bones are broken. It never rains but it pours, so it seems.

When we returned home, I felt pretty horrible and I'm sure son's accident gave me quite a scare. I know pneumonia is a nasty illness and realise that I have been much sicker than I imagined for several days. No wonder I felt so bad. I made a hot drink and have had several hours sleep, somewhat more than a nana nap!

I've posted a couple of photos. Miss Six's wristwarmers. I would have liked to knit a thumb, but her thumb is hardly thicker than a pencil. Far too skinny. The locket is gorgeous. It's silver, which DIL and I both prefer, and beautiful. What was even better was that it was such a surprise. When I talked myself out of buying for myself, I really had totally put it out of mind and I had not looked in the shop window at all, so I wouldn't be tempted.
Posted by Jan at 6:28 am

Belated happy birthday! And please take care of yourself - pneumonia is a really serious illness, even with antibiotics. I hope you are feeling better soon.

Happy birthday. Best wishes for a speedy recovery. I hope things get better for all of you real soon.

My what a trying time! Very best wishes for your birthday and hope youre feeling better soon. Love the locket too, its gorgeous, lucky you!