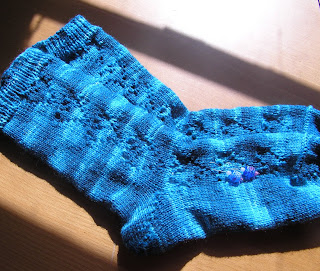 Some finished socks. These are from the wool I received form Georgie for being close to date and time of Grace's birth. The pattern comes from Donna at RandomKnits where she knitted a trial pair of the new Patonyle. I love the colours of this wool. Shades and shades of aqua. It reminds me of the colour of the water under the Swansea bridge near Newcastle. When the old Pacific Highway passed through Swansea, I've been stopped in traffic many times and always loved the aqua swirls of water I could see from the car.

Normally I would reserve a pattern like this for solid colour wool, but the hearts appealed to me. They were an easy knit, although I made a few changes. Actually, I'm hard put to mention someone who doesn't make changes. I'm the same with recipes. I'll read through and use the basic idea but substitute according to store cupboard and individual likes. I used five dpns in total as i did a row of hearts down each side. I cast on 15 stitches (instead of 16) to each of four, used some stitch markers from Georgie to mark off the 11 stitches of the pattern. I also added another row between each pattern repeat. Four hearts down leg and three on the foot. The wool was soft and feels cosy and warm and a bit thicker than many sock yarns like Opal. If you look closely at the foot, you can see the stitchmarkers, also from Georgie.

Perhaps a suggestion? I'd try these again in solid colour sock wool and I think that they would look pretty with a ruffle around the cuff. Another suggestion I like better than the ruffle would be a picot edge to the cuff. I'm thinking of using just Donna's chart and placing some hearts on granddaughter socks. They are all girly little girls. 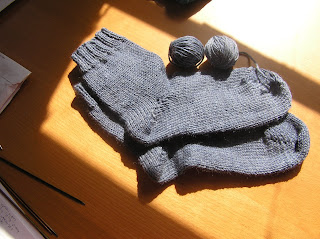 These grey socks are for my eldest grandchild. He begged me for some bedsocks which he could wear after his shower at night. He's nine and it's been a while since I made socks for him so it was a bit of guesswork. The last pair I made, he wrecked. He ran around the backyard in socks with his dog snapping at his heels in play. Socks did not really like this treatment! He had no colour preferences, just wanted something warm. These are like cast iron. The wool was something called Balmoral Tweed (????) from L*ncraft. I would not buy it again. It's thick and I actually found it hard to knit. It has some nylon in it and is supposedly machine washable. However, I was slack and didn't check the metrage on the ball. From memory, it was about 85 metes. Not much. You can see how little I had left over from socks for a nine year old. 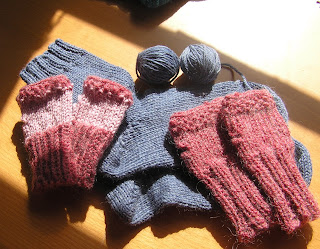 The handwarmers are for his sisters. Again, a bit of guess work involved. Miss Three really does not need such things but I didn't want her feeling left out. Two colours so she has no real excuse to snaffle her big sister's gloves. Miss Six is tall and skinny like her brother and both feel the cold easily. She wants these for morning wear on the way to school. They are from some Caressa I found in my stash. It's so long since I used it, I can't even remember the original use.

I'm beginning to feel a bit better from the pneumonia. It really knocked me around but I had a very bad bout of the flu first which did not help at all. I'm still taking things easy and getting lots and lots of rest. Yoghurt every morning to help me cope with the ongoing antibiotics and lots of fruit and vegetables too. I've even taken to putting honey in a cup of hot black chai tea. I don't put milk in teas and can't quite come at milky chai. I never use sugar in anything, but the honey seems to be helping and I'm used to it now. Over the last three weeks I have been to work just two discrete days, not even consecutive. I decided I just had to get over this properly. Hopefully next week I may be back, but I'm not pushing things. I'll see how I feel Monday morning.
Posted by Jan at 2:33 pm

Glad you are taking it easy.

Glad to hear youre starting to feel a bit better - good move to not try and overdo it and go back to work if youre not up to it. Pneumonia seems to linger for ages, poor thing.

I love the heart socks! Youre right, I would have picked a soild colour too for that pattern, but they have come up a treat.

Socks look good; I change patterns quite a bit too, especially if I can find a way to have less seams!