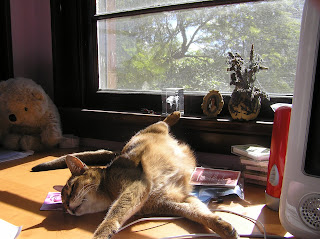 The weather has been beautiful lately here. Clear Sydney August skies and sunshine. Here's Sweetpea, the resident Abyssinian who likes to think of herself as having the favoured status which ancient cultures gave to cats. She's stretched on my desk. Her rival, my bear Wesley, is between the windows, stuck in the corner in the dark shadow. Sweetpea loves sunshine and she's almost as good as a clock. She follows the sun around in the house. Late afternoon will find her on my bed. Early afternoon and mid-morning she likes my corner desk with northern sunshine streaming in. Breakfast sees her on a cupboard in the dining room, catching the eastern sun as it rises and shines through the trees bordering the Pacific highway. She made herself comfortable on my desk, pushing papers around so she would not have to lie on the bare wood. Here she is on the paperwork from my lovely new phone, a Nokia 6300, which does all sorts of things, more than I need or understand.

I think it's not too cold outside, but I can see from the movement of the trees that it's quite windy. I haven't poked my nose outside to check. I had the flu all last week and am only just beginning to feel a bit better. I missed a week's work and am not really looking forward to going tomorrow. I still have a really bad cough which reduces me to jelly with tears streaming down my face. My ribs are sore from coughing and I've been forced to take something to subdue it, for perhaps the second time in ten or so years. 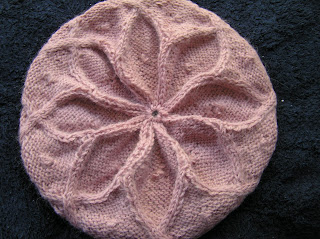 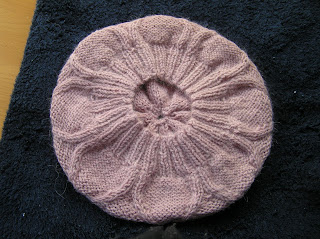 The next two pictures are of the rangoli hat which has taken me a week to knit. A rangoli is an Indian design, not necessarily identical to this one, and is often drawn on footpaths outside homes to welcome visitors. It can be coloured in with coloured rice flour or powder. The Wiki link has some more designs and history.

I didn't know all this, in fact had not heard the word before when I found Paisleywombles's hat. From there I went to the PDF pattern.

The designer is right. It's not a complicated pattern at all. It just involves carefully counting the 8-repeat pattern, until the flow of the pattern is established. when one's head is full of mush and throbs with a headache and aches even more at every cough, then it becomes more complicated and I ripped out several centimetres twice. Even now, I know I have made some mistakes. I have more wool which would have been better suited to the design, but I was too sick to go through boxes to find it. This is 8 ply pure alpaca from Bendigo Mills, knitted on 4 mm Knitpicks options needles. A more tightly twisted and spun wool would have made the pattern stand out more disinctively. It's really a bit blurred and that's not just the photograph. Colour is called something like "dusty rose." The colour is definitely deeper than the second photo shows, and also a bit more intense than the first, although nowhere near the colour of the one Paisleywomble did. With a mushy head, the counting was quite meditative and I marked off each row as I did it, although the pattern progresses in a logical way. I followed the written pattern, I'm more verbal than visual, although I have trained myself to read and use charts.

I love the alpaca from Bendigo. The hat is so soft and light that I would hardly know it's on my head except for the warmth it brings. I'm having a weekend on the Southern Highlands in a couple of weeks. Last year at the same time, it was very cold when we played at being tourists on the Sunday. I'll be taking this hat then.
Posted by Jan at 3:11 pm

Lovely hat - well done. Have a good day tomorrow; think of the upcoming trip away when things start to get you down!

Beautiful hat! I like the Bendigo Alpaca as well. Enjoy the sun!