so where do I live? 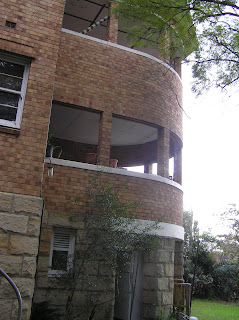 I doubt if there will be anything knitting related in this post, but it's here in response to Tinking Bell's meme on homes. I live with my eldest son and his wife on Sydney's green and leafy upper North Shore. We're right on the Pacific Highway on one side, with a major side street down another side. The block is already large and takes hours to mow, but used to be bigger. One side of it was subdivided some years ago and a house built there. The very bottom corner and the bottom side was already split off. the house was built in the late 1920s and is in the Art Deco style with lots of curves, glass bricks, balconies etc. It's heritage listed by the government. There are eight balconies in various places around the house, some of them covered. 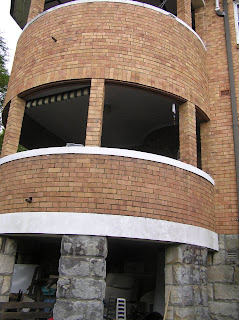 These two pictures show the balconies on the western side of the house. The bottom on has sandstone columns, the other two have brick walls. We eat on the middle balcony all summer and I have a little section on the top balcony with a couple of old, disreputable lounge chairs and a small table where I knit when the weather is mild. The rain hardly comes in at all, so it's a refuge. Main bedroom and mine both open onto the top balcony, and since we put back the original wooden screen doors, I leave my door wide open on summer nights.

Late on summer afternoons, it's too hot out there as the sun shines in from the west. The view is amazing, particularly from the top floor where we can see probably eighty kilometres (fifty miles). We can see down the coast past Bundeena and Cronulla, west past Mulgoa and well into the mountains. Unfortunately, the New Years fireworks on the harbour are not visible because of the angle of the harbour to here. As you can see the place is high. Daughter-in-law and I childishly enjoy pitching dirty washing down the chute from top and middle floors. It makes a satisfying thud as it lands in the laundry behind the balcony with stone columns. Behind that laundry is a very large cellar, and a garage right at the front.

The house was built in a time of servants. There's a small bedroom upstairs which was the maid's. Between the kitchen and dining rooms are the pantry with a butler's pantry next to it. This has cupboards for glasses and a a large inbuilt dresser with cutlery drawers and shelving for linen like tablecloths. 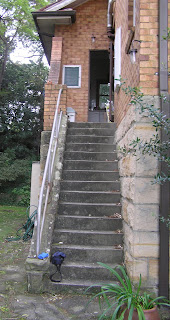 Not only were there servants then, but deliveries by tradespeople. These back steps show the hatch right at left top of stairs where bread and milk in a pail would have been delivered. The hatch has been preserved for history's sake, but has been walled up from the kitchen side. Groceries, meat and green groceries would all have been carted up these stairs. The steps are a good fifty metres from the side street and drive. I picture the horse and cart with the horse waiting, hopefully, for the tradesperson to return.

Living here keeps me fit, LOL. You can see how far up we carry laundry or how far down we go to put stuff in the garbage. There are just as many steps onside to get to top floor. The steps at the front of the house have been split. There are six up to the front porch and door, and another dozen around the corner. The removalists just loved this place. Not. 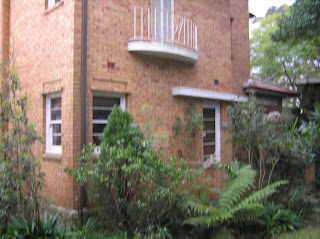 I mentioned balconies. There are eight in total. the big back balconies are very large. Most of these others are very small. There are a couple of juliet style balconies from lounge room and two of the top floor bedrooms. These are uncovered. Shutters shield the rooms behind these. Downstairs, a partially covered one opens from dining room, although it's basically hidden behind greenery here. 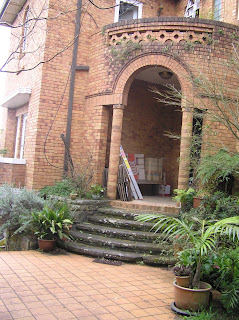 You can see the elaborate front porch, again very Art Deco in style. I sit out here on the steps and knit on hot summer afternoons as there is almost always a breeze and it's in the shade. Inside, the lounge dining and office rooms, have fireplaces with elaborate designs, mostly curved and arched niches in the walls for ornaments or vases. There's another niche on the curved landing of the stairs to top floor. Upstairs, above its roof is yet another balcony, this time opening from main bedroom again. It looks out onto highway.

I think that the original builders would be amazed by the traffic on the highway now. It never stops and many large trucks and buses use it constantly. Traffic goes down side street as it leads to a back way around Lane Cove Park to an industrial area on one side and Macquarie shops and Uni on the other. When outside, it's quite noisy. However, the house inside is very quiet. I think the walls must be quite thick.

It's a comfortable house and suits our style. there is plenty of space for me to give my son and his wife their space. A dozen people could sit around the garden and still not see any of the others there. At night, after dinner, I uually spend time in my room, although when there is daylight saving, we sit outside and talk until the mosquitoes arrive to devour son's wife.

The whole house is very comfortable and I'm glad to have this refuge.
Posted by Jan at 12:02 pm

It does sound as if you are very lucky. Thanks for an interesting post.

hat a wonderful house! And what a great post - you have a lovely home and I adore all those balconies!! - How nice to sip champagne on a summer evening!

What a beautiful house!

What a remarkable and beautiful house! I love the historical features. Im with Tink - I'll join you for a champers on the balcony!