an unholy alliance or from the sublime to the ridiculous 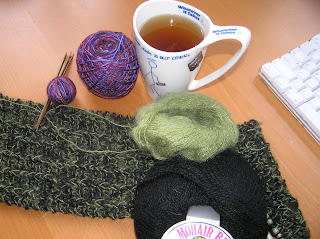 This scarf really is a case of the sublime to the ridiculous or something like that. The olive green mohair is Anny Blatt kid . It's not a colour I normally wear, although I like it. I bought two balls of this at a sale and I have ripped out about five attempts at different patterns for scarves with it. So I put it in a corner for a few months for it to make up its mind as to its use. The black is something quite old. It too is mohair 25 %, 8 ply, made for GJ Coles. I have no idea when Coles last sold anything like this, but it's certainly not recently. It also has some merino in it and quite a lot of olefin which is a manufactured, artificial fibre. Like the AnnyBlatt, I've tried several uses for this, but it made my hands ache. I bought ten balls, no length given, from a warehouse several years ago for the total amount of $2.50. The ball band shown here has $2.58 printed on the back.

I've decided to get a start on what I hope will be a substantial number of warm beanies, scarves and socks to give away to charity for next winter and I decided to combine the expensive and the dirt cheap. For some reason, my hands haven't ached using the two yarns combined on 6 mm needles. It's certainly a warm scarf. I've finished the first ball of the black, but there is still quite a bit of the olive green left. So far the scarf is about a metre long. I'll keep knitting until the green is done and see if that's long enough. The pattern makes a reversible scarf and is only four stitches long.

I've done one Nutkin sock in the wool shown at the back. The pattern can also be found on Ravelry. The lovely colours suit the pattern which is quick to knit. Somehow I have lost the band but know that it comes either from the Knittery or from live2knit. Both have lovely wool in beautiful colours and even better, great service. The colour shown here is just a shade bright. The purple is not quite as bright but is tempered by very deep fuschia pink.

The coffee mug with chai tea in it is one of a set. DIL's mum gave us each a different one at Christmas. They too are done to benefit a charity. Various celebrities have decorated a mug and written a short message along with the words "whatever it takes" on a mug. A percentage of the profits from the sale of the mugs goes to a nominated charity. This one is done by Roger Moore. Mine is by Sir Michael and Lady Shakira Caine. They come boxed, hold a good amount and have a comfortable large handle.

First day back at work tomorrow after the pneumonia. I'm not really looking orward to going back, but think I'm OK now. My skin, (not to mention my hair) still looks bad from being so ill and I have a slight cough. I no longer have 2-3 hour nana naps in the middle of the day after waking at 9:30 am and doing nothing all day. However, stuvac starts at college in early November and there is a break of a week either late September or early October, so it's not long till the end of the year. I've been overwhelmed by calls, emails, cards, flowers and a magnificent large box of fruit from work.
Posted by Jan at 4:19 pm

Glad you're feeling a bit better. You are the third person I have heard of in Sydney this year with pneumonia. One woman at work's partner has been in RPA since Monday, so you may have got off quite lightly.