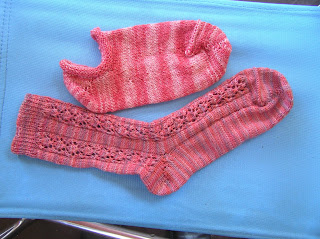 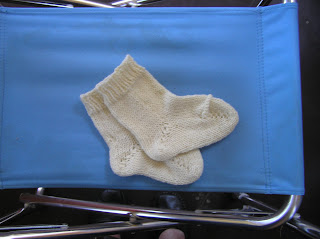 The little white socks are for Winterwarm, a charity collecting warm clothing for Afghanistan. They are made in some old wool I've had for ages, at least 8 ply, possibly 12. Knitted on 4 mm needles. They were a very quick knit. I've decided to try to have quite a few garments for Winterwarm's next collection. so far I have a couple of pairs of socks, a hat, two shawls and two scarves. I appreciate all I have and want to share some of my skills and resources. I've always done charity knitting, but this is the first really concerted attempt to get quite a few things together, although a couple of years ago, I was able to give about a dozen hats and some scarves.

The pink footie sock is from my prize seacell yarn from last year. Its mate is on the way to completion.

The other sock is wool from Katie at Live2Knit. It's one of my own designs although the insertion comes from Lace and eyelet stitches by Erica Knight. It's called King Charles brocade, although it is totally different from another pattern stitch of the same name as shown by Barbara Walker. Apparently Charles had a brocade pattern on his vest when he was executed by Cromwell in 1649. Anyhow, I liked this and think the wool and stitch go well together.
Posted by Jan at 2:00 pm

Very pretty pattern that King Charles Brocade and it works very well with that yarn.