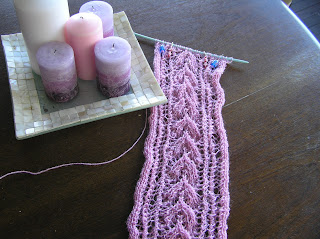 I think Bells must be an enabler. I've started another lacy scarf, leaving aside my beloved socks and the two jumpers already on the needles. Not only that, but last night I found myself deliberately seeking out laceweight yarn on the net. I doubt I would have bought any as I have several lots and a little goes a long way, but I was definitely looking. I was even considering better needles as my Knitpicks options already have something on them in the size I want to use.

This is Bendigo laceweight, bought because of both its yardage and price when I was considerng a mystery shawl KAL. I had already done a similar shawl some years ago in thicker wool. However, this KAL fell apart before it even started. I don't mind the wool but found myself yearning for some merino/silk mix from several vendors. Some of the colours were absolutely luscious. Bendigo's laceweight came in some decidedly uninteresting colours and I will almost certainly overdye this scarf when it's finished. I'm considering several colours but haven't yet made up my mind.

I don't have the pattern with me at the moment, but this comes from the Inside Loop. It's called something like the Wild Strawberry scarf and comes from their archives. The pattern includes a larger wrap which is similar to the scarf but which has an extra panel with points on each side. They have some rather nice designs and I've made a couple of them. In this issue, I particularly like the man's jumper with the celtic knot and the braid on the sleeves. They also have jumpers in larger sizes which suit me as I'm, let's call it, "well endowed" and often don't like jumpers which are really designed for women with a smaller bust and then just upsized to make a range of sizes.

Just as well I don't mind grafting, although I will brush up on it again soon. The picture shows just over a half of the first section of scarf. Another half is then knit and the two are grafted to preserve the scallop edge. Obviously, blocking will make this look better.

The colour is pink, very pink. This photo was taken early this morning as I tried to make amends for no knitting for three days. I think it's picked up some of the deep violet of my Advent candles.* I had a very hectic few days and really did not want to carry around a cone of wool with me. I try to do several repeats a day. It's only ten lines and is easy. Much better than the boring single line pattern of the green scarf below. There are YOs and purl 2 together on every back row, but they occur in the same place each time, four times/row and are easy to do.

* Here's a very brief explanation of the tradition of Advent candles. Advent is the season in the church calendar of the four weeks before Christmas and Advent candles are becoming popular again with individuals and families. The violet is for the first two and the last Sunday and signifies repentance. The pink candle is lit on the third Sunday as a sign of rejoicing that an end to the penitential time is near. The extra white candle stands for the coming (advent, advenio, I arrive, Latin) of Christ.
Posted by Jan at 9:45 pm

Oh that is so very pretty! I'm very happy to be enabling you!

It's a very pretty design.

Thanks for the explanation regarding your beautiful candles.