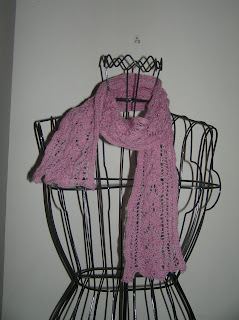 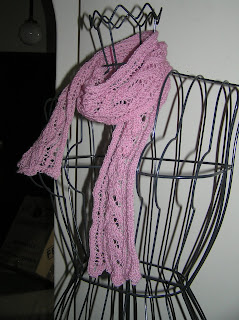 Here's the pink scarf finished. It's not blocked yet, but that can wait a few days. I decided as I was coming down the home straight with it, that I would give it to DIL's mum. She'll be here several days over Christmas. I don't like the colour myself, but she may. I'll ask DIL before I trouble myself dyeing it.

The grafting of the two pieces took me ages. I don't mind doing kitchener graft and there were only thirty three stitches, but it seemed to take forever. Fortunately I did not darn the end in immediately after finishing the graft as I really needed to ease my fingers across the scarf and loosen it up just a bit. Otherwise I was pleased with the graft. Toes on socks are one thing, but joins on scarves are another altogether.

The wool is 100% pure wool, 2 ply laceweight from Bendigo. I bought it to try something else out and it came from my stash. I have other better quality laceweight in the stash. I really don't like the colour. On upending the cone, I discovered it was called "musk." Hmmm. I never liked musk sticks as a child and still don't. I wonder if that dislike affected my reaction to the colour?

That now makes two lacy scarves for Bells' Long Lacy Summer. Looking back, I really wonder what bothered me about laceweight. I did make quite a large stole in laceweight cashmere for a friend's birthday a few years ago. The pattern was very repetitive but the cashmere was expensive and very fine and soft. As the picture from my original blog shows, it was quite large. Not a difficult pattern at all but I had to pay attention to which row I was on.
She loved it.

I might make another scarf soon, but will consider what to do. So many lovely patterns. I think my arthritic fingers need a break from the fine yarn. I usually have several different weights of wool on the go at once. I've been concentrating on the fine stuff for a while, so may do something thicker.

Here are two pictures of the scarf on one of my DIL's ladies taken in our upstairs hallway. She has about six of these, bought from Reverse Garbage at various times. There's a dressmaker's dummy, several shop figures. I think this would have been in a shop and she has another in woven raffia. The second picture is probably a more accurate colour and was taken using the flash. Just think musk stick.

It looks lovely - but if you aren't happy with the colour you can always gift or dye!

Have a lovely and peaceful christmas!

Gorgeous. Yes, I'm starting to feel more comfortable with laceweight yarn, too. It takes a little bit to get there, I think, but it's worth it.

I love your DIL's ladies - so simple and elegant and such cooperative models!

The scarf looks good and I hope the recipient loves the colour.