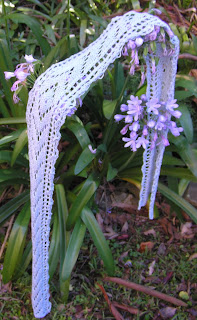 I hope everyone had a very pleasant Christmas. Mine was great, much better than last year when I had just left my home and marriage of forty years only a week before Christmas. One son remarked that it was good to see me smiling this Christmas, he hadn't seen much of that last year. We had a pleasant family time at my brother's and the young children all had a wonderful time in the pool after lunch. I went to church with my son and Dil in the morning, to the church they attend weekly. I know many of the people there and the service was really lovely, one of the best Christmas services I've been to in a long time. I usually attend a different church in the city but went with them for a change. It was good to go by car too, as I normally catch the train to city. LOL.

Here's another lacy scarf for Bell's Long Lacy Summer. This one is done in Heirloom Cashmino and was quite a quick knit. The cashmino is a blend of merino, cashmere and a bit of microfibre. The pattern is on the Knitpicks site and is called Victorian Spring Lace. While it did not say so, I knitted the scarf in two pieces and grafted them together. This gave me a good scalloped end at both beginning and end. The graft can be seen in the photos as a diamond with a yarnover in the middle. Grafting something with a directional motif like this arrowhead also ensures that the arrowhead goes in the same direction on both sides when worn, in this case, up to middle of neck.

The yarn was pleasant to work with, easy to handle and knit with. No splits when knitting either. and the colour appealed to me. I gave it a fairly severe blocking yesterday to open it up. There are only twenty one stitches/row and eight rows/pattern repeat.

I gave the pink scarf pictured below to DiL's mum s a present. She sews and can knit but hasn't for very many years. She was intrigued by the lace on the blue scarf where "every stitch is part of the pattern," as she put it. She really liked the pink one. I offered to dye it, but she said the colour was lovely, so that's one task saved.

We're having a quiet week at home here. Son and DIL and her mum are playing World of Warcraft, and I'm knitting, eating too much chocolate and gearing up for some sewing. I've been feeling like making something for a while, but it's been some time since I sewed anything. I bought Amy Butler's In Stitches from the Book Depository a few days before Christmas. It took only five days to arrive, even in that busy period and cost me $24 Australian which I thought was a good price. I couldn't find it here in any online catalogues but I'm sure it would have been much dearer and postage is free from England. I was surprised a couple of weeks ago to find just how much I had saved by buying a children's knitting book, shown a few post below, from that Depository. I paid somewhere around $14-15 Australian. I saw it advertised in an online Aussie knitting shop. It was $26. Now, I've bought from that shop and the stuff is lovely. However, They charged me a mint to send a small package across the country. While I like what they sell, I now look for some online shop in Australia which has a policy something like "$7 postage in Australia." Or similar.

So why the urge to sew? I've seen several blogs mentioning the long legged lounge pants in Amy Butler's book. I'd been planning on trying something like that using some pyjama pants as a pattern. Now I have a pattern. DIL was looking at the book after lunch yesterday and said how much she like the long pants too. So it looks like some coming up for her too. Perhaps some sheeting which would be cool and comfortable.
Posted by Jan at 9:11 am

Gosh you're pumping them out. That's another gorgeous scarf!

Another beautiful scarf. Glad DIL's mum liked the colour of the musk scarf.

BTW, have you tried Booktopia in Artarmon? They have a $6.50 postage at the moment. I think it's always the same. They are having a huge clearance sale - no knitting books on sale unfortunately but I managed to spend $70+ today! Check the prices at Book Depository for knitting books, even with the current lousy exchange rate they may still be cheaper!