a day in the life of me 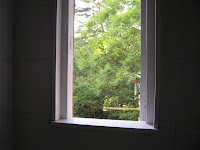 I've not done much knitting lately.. I ripped out my February Lady Sweater. I went down in needle size to get the right tension and this made it hard to knit the thick wool. When there are several hundred stitches on the needle, it was a constant struggle pushing them along. I was into the lace but decided I didn't want to do anything more. I started a couple of other big projects and ripped them out too. I even tried crocheting granny squares but gave up on them as I lost concentration and made silly mistakes. My mind is on other matters at the moment and I have fairly major meeting with the solicitor tomorrow.

So I've returned to socks which I can just about do with my eyes shut. Oh, I forgot. I did once turn two heels on the one sock and didn't even notice till I was well down the foot.

So here is yesterday which began with a bit of a sleep-in. I've not been well lately, sort of that awful feeling that I'm coming down with a cold, so I decided Saturday night that I would let myself sleep. This is the view from the window in the shower recess. The sill is just the right height to lean on and watch the trees while the shower plays on my back. I don't do it much, I'm usually very quick in the shower, but it was lovely yesterday. 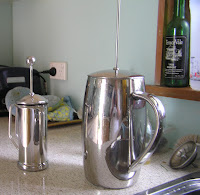 Time for coffee. It's my treat for the day, just one decent sized mug and then usually water till dinner time. Sometimes a cup of tea if it's cold weather. We have a whizzbang coffee machine but it's hardly worth it when there's just me. I use the small plunger for myself and if my son is working from home we'll use the big one. My son buys the beans from a coffee shop owner who roasts his own beans. Much better and fresher than almost anything else which can be bought. 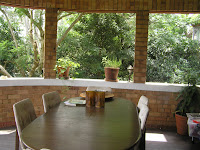 Breakfast is untoasted muesli and fresh summer fruit taken on the balcony. This one is on the middle level of the house and they are all about 18' deep and 15 ' wide. Absolutely beautiful spot to live in the summer time and usable even in wet weather. I have one the same size opening off my room straight above on the next floor up. I have an old lounge and a rather decrepit lounge chair up there. I'll often sit there in the afternoon when I'm home to knit. Tonight the view has been great - lots of lightning to the south and west which is the direction looking straight out. 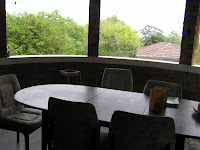 When I left home, my second son gave me this table and chairs. He'd been looking for some new stuff for himself and forgot he had left a bid on these on eBay. They are from Parker and he paid $60 for the lot. I'll keep the table which extends, but the chairs are in very poor condition and almost impossible to fix properly. I would not have chosen the upholstery myself and the people who sold it obviously did not know how to re-upholster each chair. Still, they stay outside all the time and we use them a lot. 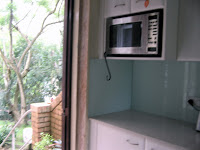 On to some cleaning. When we arrived here, there was a small filthy fishtank in this corner. It belonged to the daughter of the house. Her dad was back here much of last year and he never cleaned it either. We replaced water and fed the fish but really did not want fish in the kitchen. There were three goldfish in the tank. I doubt that they were fed properly before as they grew a lot last year. The tank was on a piece of foam in this corner, right under the microwave cupboard. Fortunately the owner's son came and took them to his mother's pond but left the mess behind . The tank had obviously been there for years and the foam it sat on was putrid and damp. There was a horrible mess under the foam and the aqua coloured glass splashback had a thick coating of gunk which was almost crystalline in hardness. It took me most of the morning to clean it. 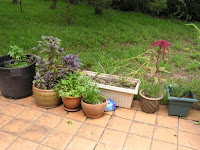 Then I picked some herbs to use in lunch. The dark purple one is Thai basil. Last summer we had a lot of herbs which failed to thrive. There are heaps of big trees here and it's difficult to find a space which gets enough sun for herbs. I dragged the pots out onto the path above the drive and they are coping with the light there. I picked lots of chive and some of the Italian parsley. 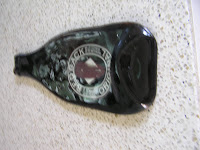 Do you like the spoonrest? It's been a bottle of Redback beer which has been heated then reshaped. I have always liked wine but never used to like beer till my sons introduced me to good beer some years ago. Redback is nice as are many of the small boutique brewery beers. Not that I drink much of either wine or beer, but I'd enjoy the good stuff. This stays next to the stove and is very handy. 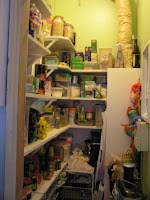 Inside to try to find the flour in the pantry. DIL has just re-organised this, so it took a bit of finding. Now she is 6' tall and my son is 6'5". I'm 5'3" and usually everything I want is out of reach. That was the case again this time and I had to get the steps out to climb up and get it. It's a bit of a pain having to get them out but it saves me constantly asking for help. We've re-organised the cupboards so I can easily reach often-used plates etc. That way I can empty the clean things from the dishwasher and put them away without having to leave them on the bench. 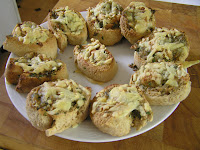 I was making an old recipe, tuna pinwheels. There wasn't much in the house to eat. Not a case of the day before payday, but rather a case of neither son nor DIL making time to do the shopping. I'd made a soup the night before with the frozen hambone from Christmas and some kumara and son added some frozen vegetables and a can of tomatoes to the leftover soup to pad it out. The pinwheels were to replace bread because that too was very low.

They are very easy and adaptable. I made some very basic scone dough, 2 cups SR flour, wholemeal here, some salt, a bit of butter rubbed in. Make into a dry sort of dough with about a cup of milk. Place on a floured surface and pat or roll it into a rectangle, fairly thin if possible. Spread with small can of tuna mixed with some mayonnaise, lots of herbs, lemon zest. Roll up along the long side and cut into slices. Place flat side down on baking paper on tray and sprinkle with grated cheese. I baked these for about 25 minutes at 200° C. They are best eaten fresh. A mince mix could be used instead of the tuna or perhaps some thickish leftover curry or whatever. 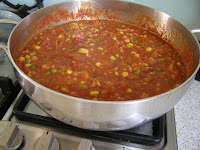 Here's the beefed up soup. The tomatoes were a can with arrabiata seasonings in them and they gave quite a tang to the soup which went well with the rolls. As I'd made it the day before, the flavours had had a chance to develop and it made a quick, tasty and nutritious meal for four of us. DIL's mum has been here for the weekend. 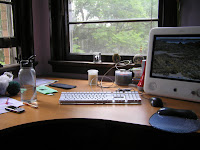 Then it was upstairs to my room to play with the trial download of a program for writers, Scrivener. It keeps track of drafts, research, audio and video files and much more. There's the capacity to storyboard one's work. Now I don't know quite what I'm going to use this for, but I've been considering it for a couple of years and figured it was time to at least give it a trial There is a lot of support for it with active forums etc. It's not a replacement for a word processor at all.

Sorry, I just remembered. It's only available for a Mac. I went over to the dark side about three years ago and wouldn't go back to a PC. Son who works with both and who started out with PCs now runs a Mac network at home. He hates fixing his friends' PCs as the Mac is just so much easier on many fronts. Yes, it's different and needs some adapting to. I've been using a computer since the 1970s and love my Mac. 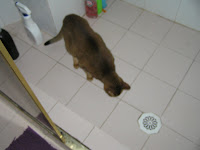 After I had just about addled my brain with the new program, I sat outside on my balcony and did some crochet. Then I ripped that out too. Sweetpea set up a horrible noise near me. She was thirsty. She much prefers to hunt down her water than to use her water bowl. She loves to drink in the shower recess. I turn the tap on and straight off. When the dripping has finished, she drinks. 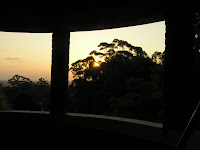 Sunset from the top balcony finishes my pictures. Every sunset is different but they are all beautiful from here as we look pretty well due west to the Blue Mountains and beyond. The light changes rapidly so I needed to have the camera ready. When the sun gets low like this, it's only a couple of minutes before the light has faded and the sun gone below the horizon.

We went out for dinner to pizza at Chatswood. We don't often eat out here as we eat too well at home. We really haven't found many places we like over here and much prefer our old pizza place. People came to Mario's from up to an hour's travel away.

The place we went to in Chatswood is large and airy. I've been there twice before and it's been fine. Nothing like our favourite, but OK. Last night we arrived at 8:00 pm. The service was rushed and we were barely served our meal when we were informed that the kitchen was closing, did we want anything else. Our pizzas were only lukewarm. I wonder if the chef is the same person as on week nights which is when we've been before when they were quite nice. The place was shut and lights were being turned out at 9:00. We were used to a midnight close.

Nice to hear about your day Jan, thanks for sharing! Have you tried Pizza Olla at Roseville - we love it!

Thanks RoseRed. No we drive past that place but haven't gone in there. Reel is quite good but needs a booking at night and the little cafe on the other side of the railway line there does good breakfast with freshly made juices.

I don't think it's just a case of looking back fondly to Mario' pizzas. They really are much better than any I've tasted although my son does really great ones at home.

Thanks for sharing - it was all very interesting.

Shame about your pizza night out!

What a gorgeous spot to eat at and look from!!

You sound like you need a boost to your knitting mojo - socks would help and so does something easy which looks stunning - scarves spring to mind.

Hope you feel much better soon!