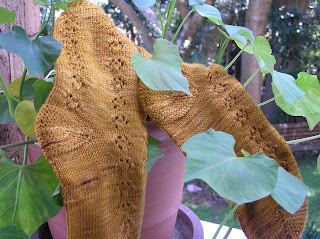 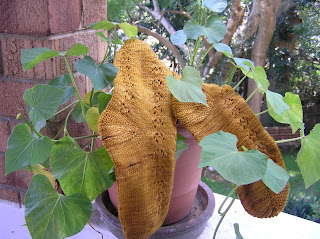 It's been a while since I did any work on these socks. They are from Donny's lion'smane wool, mentioned a couple of posts down. The insertion lace is a cat's paw pattern with three rows between each pattern repeat, seven repeats on leg and six down the foot. I thought the cat's paw motif went well with the name of the wool. They are resting on a sweet potato vine. Just before Christmas we found a whole kumara in the pantry which had fallen out of its basket and not been used. It was beginning to sprout at one end so, as an experiment, I planted it. It's an attractive vine and has grown quickly. As it's in a pot I doubt we'll get anything from it, but we all like looking at it.

I enjoyed knitting these, it didn't take long to do one repeat whch was only six rows and so they knitted up quickly with a very easy pattern. I've done short row toes many times and usually done a three needle bind off on the outside of the sock. it makes an unusual finish and the join does not bother me at all. This time, when it came around to doing the three needle bind off, I pushed the sock through my needles and did the bind off on the inside of the sock.

The wool was very nice to knit and I enjoyed it. As you can see from the stitches on the sole, it knits very evenly and I enjoyed the well blended colours too. I have some more of Donny's wool in a teal colour and am looking forward to using it. I'm still considering what to do with it. I think my next pair may be from the wool from missyfee which was sent to me in a draw on a comment thread . The colours remind me of the beautiful sunsets we see from here most evenings. I'll have to think of a pattern to do justice to the colours which are lovely 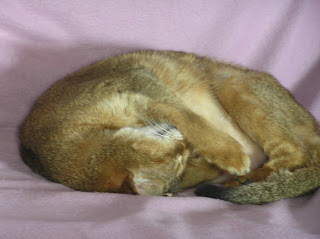 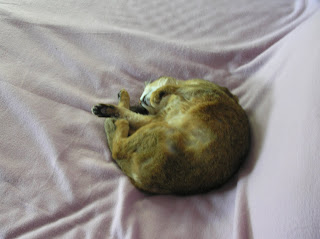 I was also calling these socks Sweetpea's socks. Here are a couple of photos of her. She looks like a miniature lion. She's ten years old and quite small, an Abyssinian breed. She's lucky to be alive. Last October I was alone in the house and heard an odd noise. I went downstairs and two terriers had chased her up twenty five steps and into the house and were mauling her. They flew out as soon as I came down. They had collars and ID chips but no leads so they were either being walked without a lead or had escaped their yard. They looked as if they were from the same litter.

The poor little thing had been critically injured and spent over a week at the vet's with drips etc. She had been bitten badly around the head and had holes in her stomach from the bites. Fortunately these had missed vital organs. One had her haunch in its jaws and had been shaking her. Her pelvis was broken and the muscle had been totally ripped apart. The vet did not think she would survive but DIL told of another time when she had apparently been kicked. The vet then said she was a survivor and would fight for her life. She won this close shave but it was close as she is now ten years old and twelve is an average for her breed. She's recovered. One leg looks odd from behind and she's not quite as agile as she was, but she's still here.

I contacted the local council, but without being able to quote specific ID numbers, they could do nothing. I gave them a very good description and our location but they did no more. We were all upset about this. What if it was a child another time?
Posted by Jan at 1:55 pm

Oh that's awful about lovely Sweetpea but she clearly is a fighter. I love it when cats sleep all curled up like that - I rub my cat's tummy and she stretches all out, then curls up again!

I would never have thought to plant a kumara - that's very cool that it has grown. And the socks look fantastic!

I'm not an animal person but I can't abide cruelty to animals - even from other animals! To me, the dogs' owners are as responsible as if they were attacking the cat themselves! And you're right, what if they attack a child?

Oh, that's awful Jan! What a horrible experience for Sweetpea. I'm glad she is being taken well care of.

Poor Sweetpea! What a sad story - but you've found her and she's recovering. Good for her.

What a novel idea it is plant a sprouting kumara - that is sweet potato isn't it? It's a lovely plant and those socks are gorgeous!