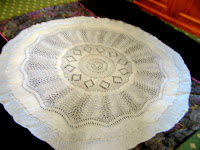 Voilà one pi blanket finished and blocking. Actually it's a really terrible photo and I think I'll try and get a better one in different light with a different background when the blanket is dry. Room had light coming in from wrong direction and the background has sucked all the colour from the knitting. It's actually quite a strong sky blue, Australian sky, not pale English sort of colour.

It's blocking on a black and dark purple king size doona cover and there's not a lot of cover left uncovered. I could have stretched it out even more, but it's almost the size of a football field* already. Admittedly, she talks of making a blanket like this in fine wool suitable for a baby. This is stash wool, Cleckheaton Country, 12 ply. Thick, thick, thick. I used almost the full 20 balls which I had. Quite a lot of stash busting!

I soaked it in the laundry tub for some hours with a small amount of Nutrimetics liquid cleaner added to the water to allow it to penetrate well. Now there was no way I could possibly have rolled this in a towel, so I carefully picked it out of the tub, not allowing it to stretch with its own weight and transferred it to the washing machine. No agitation, just a good spin.

I pinned it out on the lounge room floor and it took a very long time. I have arthritis and I found it a difficult job to do. I knelt on the floor, I knelt on a small soft cushion, I stood up and bent over, I sat on a small stool. Knees and hips protested at all these positions but it needed doing, so I persevered. When I had finished it, I could hardly move for a while. As I put it over the balcony rail, a young kookaburra flew down from the tree a couple of metres away. It sat on the edge of the balcony wall and watched me pull the cover and blanket out. I was about a hand span away from it before it decided to fly off. Very occasionally we will feed the wildlife here but there was nothing I could give it. There's enough bush etc around here and regular feeding is not a good idea as the animals and birds then rely on it.

I'm keeping this for myself. Eventually when I move out of here, I'll probably move up the Blue Mountains or perhaps to the Southern Highlands where I have friends. Both cold spots and it will probably get lots of use. I've been using it unblocked the last few days since the spring weather turned quite cold again. It's been over my legs at the computer and was toasty warm.

*Elizabeth Zimmerman's own comment in her book from which this pattern is taken.