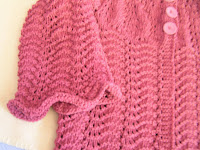 I had a catchy, upbeat title planned for this entry but I am neither catchy nor upbeat today. I had been stalled on the second half of the second sleeve of Liesl for a week and was determined to finish it yesterday. I had just finished sewing in the last end yesterday morning when my sister rang to say Mum appeared to have had a massive stroke. Could I please come to the nursing home. Mum had been unable to stand or to use her right hand since a stroke last year, about four months ago. She had been fine early in the morning when washed by nursing staff but when breakfast was delivered at 8:00 am, she was in a deep coma and could not be roused. Staff explained that they thought this was the end.

My brother, sister and I settled down to watch. I had knitting but could not do it. Various family members arrived and stayed for a while. My sons and DILs came. The day dragged on and it was apparent Mum was indeed near the end. Her pupils showed no response, she gave no sign of hearing anything, even loud talking down her good ear. Her breathing was horrifying to listen to, large raspy breaths and coughs. 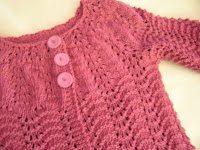 As the day went on, every breath was a struggle for her, although she did not seem to be in any pain. She had always held our hands in bed, but there was no response to this. There was often a horrifying gap between breaths and I found myself hoping that she would not start again. I came home about 11:00 pm convinced she would not see the night through. She died at 2:15 this morning. I had been asleep about an hour but woke at 2:17 and knew she had gone.

We've been back there this morning. Taken all her stuff, someone else will be in the room tomorrow. She looked so much better. This nursing home leaves them in their beds till undertaker comes and she was peaceful. Looked as if the strain of breathing had given way to peace. My sister had picked some gardenias from the garden and put them with her. We are glad for her sake and ours that the end was really quite quick, a blessing.

Neither Mum nor my sister had wanted a funeral. My side of the family really would prefer one but my brother won't rock the boat, so no funeral. There will be a private family gathering at some time in the future, probably at Pearl Beach, a place I have loved since I was very young. She would have been 89 in two weeks. 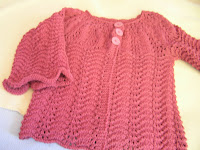 The pictures are of finished Liesl. I took about three metres more than three big balls of Bendigo Aran to make this. Colour is perhaps best in the last picture but it's really a very dusky pink. The body is made longer than suggested - I like the small of my back to be warm. Sleeves on this version are full length so i think I had good value for the three 200gm balls. I've made a slight flare/ruffle on the ends by knitting front and back of every second stitch and then doing two rows plain before casting off. If I do another one and I think I will. I'll make sleeve 3/4 length and finish with a picot edge.
Posted by Jan at 3:54 pm

Oh Jan, I'm so sorry about your mum - it's brought back memories of my dad - hope you are doing ok. The time at Pearl Beach sounds like a really nice way to remember your mum.

Your Liesl looks really good - it's a very economical knit isn't it. I like your sleeve modification - I do like a flarey sleeve!

Oh Jan, I am so sorry to hear about your loss. Take care of yourself. It was lovel to read such respectful and honest things about a close family member.

Take care of yourself

I'm so sorry to read about your mother. My mum will be 89 shortly too so this really resonates with me. A gathering at Pearl Beach sounds lovely.

I felt as soon as this post started I knew where it was going. The inevitably sad news. I'm so sorry. Take care. xo

Jan, I'm so sorry. Cry when you need to and be kind to yourself - grieving is a process, not an event. *hugs*

Hi Jan , I only drop by your blog occasionally but would like to offer you my condolences. Glad your last memory of your Mum is one of her being at peace. The family gathering sounds like a lovely idea. All the best.

I'm so sorry, Jan. This is a big loss from your life, even though it sounds like it has been a gradual decline. I'm thinking of you. And I think a funeral or other formal ceremony is important; it provides an ending. I hope your family gathering is soon.

Hi Jan, my condolences to you for your loss. May the Lord comfort you in your grief and carry you on his wings. I will be praying for you.

Jan, my heart goes out to you and your family. At least her end was peaceful and you were there for. Take care of yourself and know we are thinking of you and your mom.

So sorry to hear about you mother - hugs

It is so hard - always when you lose a loved one. Thinking of you

Jan, I'm very sorry to hear that you have lost your mum. I hope you are going ok - my thoughts and prayers are with you and your family.

I'm so sorry you lost her. It's never easy for the ones left behind, no matter the circumstances.