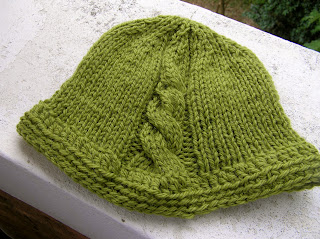 Winter is definitely on its way. it was quite chilly here this morning and still hasn't warmed up much. This hat, done in some leftover Jet will be given to some charity for winter giving. It's another bit towards Lynne's textured knitting winter. The pattern is from a Lyncraft book and I broke one of my own rules when I chose this. It's often a mistake when knitting to choose a pattern where the picture does not show the garment in full, and/or does not show different views of something larger like a cardigan or jacket. I also find it best to avoid "arty" shots as they sometimes hide design faults too. This pattern showed what appeared to be a snug fitting skull cap, pulled down onto the top of the model's forehead. It's confusingly written, there are actually three cables on the hat which is done on straight needles. I did use the straight needles as I couldn't be bothered setting things up on a circular. As you can see, there are some puckers at the top of the hat. I think they are caused by having the decreases in the stocking stitch section of the hat, rather than the cable. What is also not obvious is that there are only a couple of repeats of the cable. It does not go all the way to the top. It could easily have done so. Oh well, live by my own rules. There's a reason for them. The hat flares a bit at the bottom, rather than being a snug fit. It's also shortish. I crocheted several rows onto the bottom to make it longer. Live and learn. One case where a picture did not tell the truth.

I went yesterday to mind the youngest grandchild while his mum had some medical issues to see to. Another abnormal test result from her latest smear. This started several years ago when she was pregnant with him. Please get these checks done regularly , even if they are undignified and unpleasant and embarrassing. She seems to be fine but a close watch will be kept.

Said grandson is three. Broken things bother him and have to be fixed. It was this boy who at two used a set of toy screwdrivers, not soft plastic but wood, to dismantle the hinges of two kitchen cupboard doors and was on the third door when discovered with doors on the floor next to him.

I arrived yesterday to have his socks shown to me with a request to fix them. This was a pair I did 18 months ago for him and he had snagged the underneath of the foot and made a hole. I saw that the heel was now halfway down his foot and really, a new pair would be a better fit. I asked him the colour he wanted. Orange, orange, orange. It's his favourite colour. I have some old Magic Stripes with some orange in it, but there's also a lot of pink. I don't think he'd appreciate that. With some searching last night I found Heirloom Jigsaw has an orange, red and blue stripe, about the closest I could find. I have some cream which could be dyed, but it's handwash only and his socks get dirty quickly and need the machine.

Children learn very quickly. He tells me he's a big boy now and doesn't need help in the bathroom at all. However, when I asked him to pack away the train tracks for his Thomas engine which were spread over the kitchen floor, I was quickly told he was "only little." When I told his father, my son, he informed me that the day before, Finn had also used the excuse to avoid helping pack up , "I got a berry (!!) bad cough," which he proceeded to demonstrate. 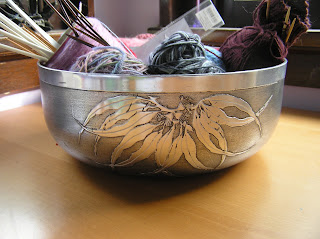 Bells was speaking about knitting using beautiful pieces for decoration. Some showed bowls, others platters, all lovely.

This beautiful bowl was a gift to me about fifteen years ago. It's a special alloy, the make-up of which I have now forgotten. It was done by a craftsman in Canberra who has since died. I think his son now carries on his dad's work. I just love it. It's about 10-12 inches in diameter, quite deep. I've used it for decoration, for fruit and also for salad. It came from a very expensive shop in the Queen Victoria Building and was several hundred dollars then. I have another two, with different patterns on the side, deeper and taller as well as narrower.

My room does not lend itself to "decoration." It's a constant struggle to keep it tidy but practical. I've just done a major sort of clothes and brought inside warmer stuff.

However, I use the bowl and it gives me great pleasure. At the moment it has often used double points in it, and some lace wool balls, leftover from summer. I've also used it in the summer out on the balcony to hold the ball of wool I was knitting. It was small enough to keep it contained and big enough to stop it bouncing out and rolling around on the balcony floor.

It is one of my favourite possessions.
Posted by Jan at 11:50 am

shame about the beanie pattern, but it's a great colour.

And that bowl is just gorgeous - what a special thing to have your knitting bits and bobs in.

It is a cute hat but a bit disappointing to put in the work and not have it turn out the way you expected. Lovely colour.

The bowl is absolutely gorgeous.

That is a beautiful bowl and it sets off the knitting paraphernalia very nicely!

Beware the leaning model and the arty shot!! I think your grandson is very clever!! He has a career in Grand Designs I think!!!

Oh I can so see why you love that. I'm a bowl lover from way back - all sorts of shapes and sizes and materials and that one is lovely. And a Canberra based piece too! It's the perfect use for it.