I've been knitting but really, pictures of unblocked pieces of a little girl's ballet cardigan don't do much for me and, I imagine, not much for most people. I've been hard at work at a pale blue ballet cardigan/wrap for my eldest granddaughter's birthday in early August. I wanted to have it done beforehand without having to rush. All done now except for the last sleeve. It's been a relatively quick knit but I found it frustating. It's a Sirdar pattern and gives five different Sirdar yarn quantities. Not one of these has a length given in the pattern. This made it difficult to guess how much to buy of the Heirloom 8 ply I wanted to use. After some investigation at home using the great information at Yarndex site I worked out I needed two more balls to be able to make this. I've now written all the lengths needed on the pattern for different sizes, should be OK in the future.

So back I went to Morris and Sons, yarn wrapper clutched in my hand, and was able to match the dyelot and get the extra. The first sleeve took about 1.25 balls and I have almost two balls left, so should be able to do it. If need be, I have a very similar colour I can use for joins. Another day or so, depending on my mood for knitting more pale blue stocking stitch and I'll be able to block it. When I was halfway through it, I realised I had another similar garment I should have done first. Miss Six turns into Miss Seven at the end of June. She actually has ballet lessons, so I'll do one for her. This time I'll make sure I take yarn length required when I buy the wool. Colour is a given. I asked her the other day what colors she liked now, and was told, "Still just pink." There'll still be a bit of guesswork here. Like her brother, she is tall but very skinny. I'll do the size below her age but make it longer. 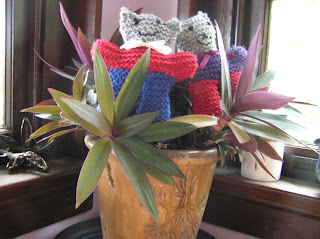 These two little bears are called Burundi Bears. (This is a PDF file.) They are cousins of a sort to Trauma Teddies. It's quite blowy and grey and there is occasional heavy rain here, so they are content to just look out the corner windows in my room at the wide world outside. They are particularly quick and easy to knit. In fact, I found seaming and stuffing took longer than knitting them. The bear on the left has legs longer by six rows than the pattern suggested and I think I'll add an extra stitch cast on on each arm as well. They take very little wool and are good for using up scraps. The pattern is for 8 ply, DK, but really, I think as long as needle size matched yarn, I don't think it would be much of a problem to substitute other thicknesses of wool. I'd err on the smaller size needle for any yarn so that the fabric is tight and doesn't let the stuffing show through. As these are intended for children, the ribbon bow has been securely sewn on in a couple of places. 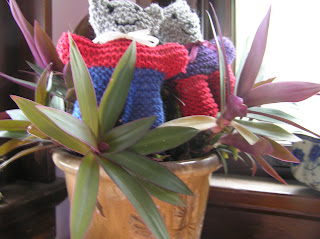 I'm going to make some more and give them to a close friend of mine who is a chaplain for the volunteer St John Ambulance organisation. We were talking the other day and he said he "dropped me in it." A friend from a Sydney brigade has been giving little knitted penguins to any children treated but she's exhausted her supply. He mentioned that I did lots of knitting but didn't quite say that I would help. However, I can take a hint. He's been a friend for years and provides a good contemporary listening ear for me when needed, so I'd like to help out. I think penguins would be cute but I have plenty of scraps for these bears which I think would possibly be quicker than penguins. They make an interesting break from acres of stocking stitch sleeves, so I'll just do them as I can and hopefully will be able to give him a bag of bears in a few weeks to pass on.
Posted by Jan at 11:21 am