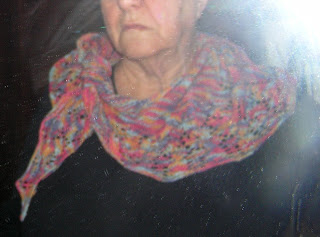 Tada!~ Voilà Ishbel who looks much better in real life than shown here. There was no one else around to use the camera. I tried another mirror but this is a darkish house in winter. We have tall trees surrounding the house closely, and the leaves have not yet fallen from the jacarandas, so the whole place is darkish at the moment. I just love Ishbel and have plans for to more as presents. One will be a dark burgundy, the other a deep green in sock wool from Daphne at our now lamented Knittery. I bought the wool last Friday and cast on Friday evening. Finished yesterday afternoon, Tuesday. There have been complaints on Ysolda's Ravelry group about mistakes in the pattern. Any mistakes I found were entirely of my own making. I find Ysolda's patterns well written and clear. I've also done two Liesl versions from her and enjoyed them too. I am not yet sure about the colour for a beret, possibly one of the colours from the shawl but in a solid.

This particular pattern and a lovely matching beret can be bought separately from her site. However, they are also a part of a new book collection by her called Whimsical Little Knits.. This is available in printed and digital form or both together. As it contained several other patterns I'd like to do, I bought the digital version, downloadable in PDF format. Last Friday, even though the exchange rate wasn't wonderful, I paid Australian $14.07 for the US$10.00 collection. There is a gorgeous little mouse, an elephant, Poppy the doll, several hats, a blanket, Ishbel and beret, some adult slippers and a pair of little shoes for a baby. Possibly another one I've forgotten. As I paid $5.95 for one pattern on Friday from a store here, I think the collection is quite reasonable.

This is the label from the wool Ishbel is done in. It was an impulse buy. I had planned using some stash wool. Yeah, right! I was at Morris and Sons looking for a pattern and wool for Miss 8 for a ballet shrug and some orange wool for socks for her brother. There was a basket of of these yarns on the counter. I liked the colour which is more pinkish than shows in the photo. I picked it up and it sold itself to me. Just gorgeous to feel and probably also to wear. It was lovely to knit. Very soft and "smooshy" as I've read somewhere. It's superwash 4 ply with 174 metres in the ball. I used about 1 1/2 balls for Ishbel.

However, I wouldn't choose this wool again for Ishbel. All the other photos I've seen of Ishbel have shown deep, clearly defined points on the long edges of the triangle. This wool is very springy and stretchy. Sproingy perhaps?? I blocked her very severely but could not get the points to hold their shape. When unpinned, they could actually be seen rapidly easing back into a relaxed curve. I think it looks fine when worn but I really liked the points. Hopefully Daphne's wool will be more obliging.

In the basket were other types of yarn too. Some solid colours, some soy, bamboo and silk. I really did not look at the rest in detail but they looked good. Sigh - perhaps another visit may be in order. Every time I go there, I spend, quite a lot last Friday. 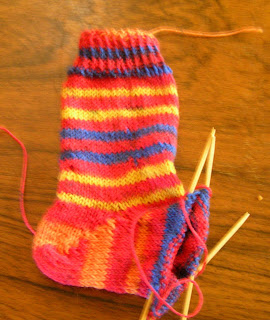 Little Finn wanted orange socks. There's no way I'll do socks for a three year old in expensive handwash wool and I could not find an orange anywhere. Heirloom Argyll used to have one, but it was a very dull colour. He wanted Orange!! It's his current favourite colour. I hunted high and low. This is Heirloom Jigsaw and orange is part of the pattern. However, it's a very long repeat. The cast-on tail you can see is orange and about half a round of the actual cast-on too. Then there is no more orange till the band on the heel. Hopefully the other bright colours will appeal to him. He would be hard to lose when wearing these socks. This is all I've done on them. Yarn also bought last Friday. 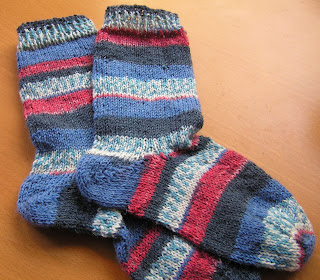 Last week I did these from some old Lionbrand Magic Stripes from my stash. Now I made myself a pair of these some years ago before I found more luxurious sock wool. They are still as good as new and they have been washed many times, almost always in the machine. They often go in the drier too. No problems at all. They should stand up to a three year old, even if there's absolutely no orange in them. There's still quite a bit left on the ball and I may make a pair for his cousin, a year older than he is.

I also bought a pattern for a ballet shrug for his big sister. I hunted high and low on the net using a variety of search terms and could find baby patterns, adults, but nothing for an 8 year old. I suppose I could have winged it, it can't be too hard, the pieces are just simple shapes, but I wanted a pattern. I think what I bought was a Sirdar and it has the sizes already shown for about four age groups. I'll probably do one for Miss 8 and another one each for her younger cousins. 8 ply CLeckheaton in a pale blue which will suit her.

When that's done, none of the grandchildren or their mothers can complain of favouritism. Each child will have had something and little extras too along the way like wristwarmers, bedsocks etc. Have to make sure I'm even handed. Actually, it all evens out in the end but does not always seem that way at first glance.
Posted by Jan at 10:22 am

Every time I see an ishbel I get all excited. I'm onto mine now and loving it.

Interesting comments on the yarn too.

My you have been busy, haven't you?

Don't think he'll misplace those socks in a hurry!

I have some of Katt's yarn which is bright yellow/ organe, which I could send to you if you would likee. Otherwise, I have a copy of a pattern for a ballet bolero that I am about to start for DD CAitlyn 4. Email me if you are interested... hugs, nat