pray, mistress mouse are you within?

Another little toy for St John Ambulance. This little mouse comes fro Ysolda's Whimsical Little Knits collection. Lots of little projects there. She has other toys too, but not in that collection. The colours have turned out reasonably well. I often have problems with such tones, but these are passable. If I made another mouse, I think I would reduce the size of the ears just a bit. They are supposed to make her look "alert" but I would prefer them a bit smaller. They are knitted with gradual increases and the main colour backing is done the same way, but a couple of stitches bigger all over. When finished, the ear edges are then stitched together and the increased size on the back rolls over the front contrast. 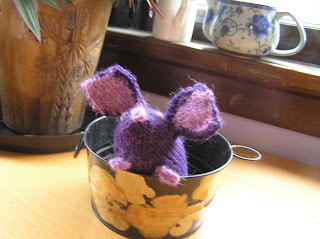 The mouse is knitted from the tail up. I-cord is started, done to length required for tale and increases from three stitches then make enough stitches to use three dpns. Because the whole thing is done in the round, the stuffing is added a bit at a time and held down with a spare finger while knitting is continuing. This actually isn't as awkward to do as it sounds, but it seemed quite odd at first. Then the decreases at the head end make it easier for the stuffing to stay in place until the nose is closed off with the thread being run around the last few stitches to make a point. Contrast colour was stitched on later. 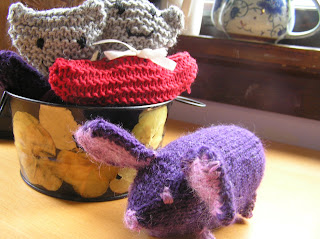 Miss Mousie was an easy knit, but took quite a bit longer to do than the Burundi Bears. She also needed me to pay attention to increases/decreases for shaping. The title for this entry comes from an old children's song, A frog he would a-wooing go which can be found here. Scroll down to page 3 to read the dire tale of the wedding of Miss Mousie and the frog. My grandchildren all loved this to be sung to them when they were small and I can remember singing it myself when listening to an ABC children's programme.. They used to cover their ears at first when hearing about the end of the story, but gradually became brave and listened for a second until they finally sang along with me. Their fathers had been the same when tiny. They enjoyed listening to some Grimm's fairy tales being read to them on tape but covered their ears in the scary bits. Then they didn't want to listen, but could not help themselves until gradually they listened all the time. All part of growing up, I imagine. 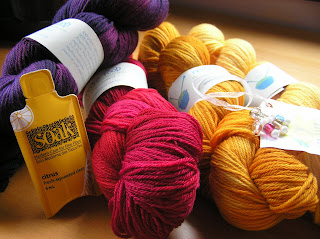 I think I mentioned that I had ordered sock yarn from Michelle of Needlefood. That was earlier in the week and it arrived yesterday, nice and prompt. It was all beautifully wrapped and feels as good as it looks. Almost good enough to eat! LOL. Not only was the wool lovely, but tucked inside were some stitch markers which I use a lot. These have jump rings which are a great size for sock dpns. Some I have are really too big for small needles, so these will get lots of use. There was also a sachet to try of a wool wash, citrus scent. As I needed to buy more wool wash to wash one of my Liesl cardigans which has picked up some dirt on a sleeve, this too was very welcome. The sharp perfumes of citrus fruit are great and one of my favourites is that of lemon and neroli.

Colours from left are all to do with food. Lavender infusion which is shades of lavender and purple. This one is for me. The deep red is really more scarlet and is "kitchen on fire." Then comes hokey pokey. I think some of this will turn into orange socks for young Master Finn. However, I won't mention hokeypokey and ice cream to him in the same sentence. He thinks ice cream was especially made just for him. Then there's orange butter cake which is a lovely warm colour. That may not be socks but perhaps Ysolda's beret to match the Ishbel shawl. Not that my shawl and the beret will be a match in colour. However, I really like the design of the beret, so will consider this wol for that.

Lots of lovely colours and great service to match. I'm happy with this.
Posted by Jan at 11:37 am

I think your Miss Mousie is very cute!

Love the yarn too - all just gorgeous!!

oh thanks for describing how you made teh cute mousie. I have the pattern but hadn't read it yet and couldn't quite imagine how it was done. That was helpful.