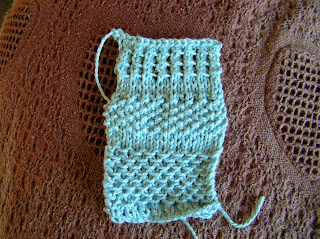 I haven't done much knitting over the last couple of days. I must have been quite clumsy as I hurt the one finger three times on the one day and it's been too sore to knit with. At breakfast I picked up my muesli bowl in one hand, small coffee plunger in the other and my coffee mug with milk in that same hand - a combination I do practically every day to go from kitchen to dining room. I had my fingers curled too tightly, or something, and burnt the back of the bottom knuckle of my middle finger against the plunger. Blisters resulted from that. The other two injuries were from carelessness probably. I snipped a bit of the fleshy part when cutting nails. Obviously not watching what I was doing and the point of a very sharp Furi knife gouged a bit from the cuticle when I was making soup. All silly little things but bloody and sore too.

However, I think things are improving and I'm certainly being more careful. I have an old cotton jumper which I bought from Katies, goodness knows how long ago, over ten years. It's comfortable, a good colour, gets thrown in washer and the commercial drier here and comes up well each time. I noticed in the bathroom mirror the other day that the sleeves from elbows down were wearing thin. I certainly could not wear it out of the house again like that.

Today I found a part ball of some soft cotton and have made patches for it. I still can wear it only around the house, but the difference in warmth with these patches is amazing. The rest of it is fine, so hopefully I get at least this winter out of it. It's worn where I rest my arms on the desk.

I decided to make some samples of textured knitting for Lynne's textured KAL. 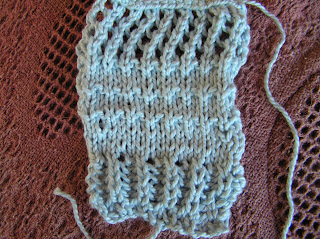 Some of these came from Knitting about.com's stitch glossary. I could have had a wider choice but limited myself to those which could be done in 18 stitches and also to those with few rows in each pattern. Some of the patterns there are not well shown and I refused to use those where the pictures were dark and unclear. Others came from the stitch glossary at Knitting Pattern Central. As you can easily see, the samplers have not been blocked. Actually, I sewed them straight onto the jumper and I can now feel the sleeves are much warmer than they had been before.

Top picture, from bottom up. This is a slip honeycomb stitch, very easy. Then comes moss stitch and one called bamboo stitch is at the top.

Lower picture, again from the bottom up. Brioche stitch, then fleck stitch (that's bit obvious) and at the top is a mesh like the string mesh on leather/string driving gloves. It can easily be seen that some affect the shape of the finished knitting more than others, pulling it in. One advantage of photographing them not blocked. LOL.
Posted by Jan at 2:18 pm

Some lovely textures and very practical too!