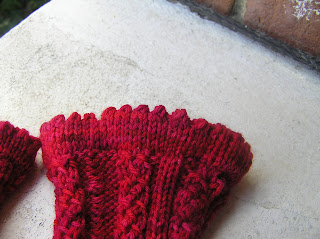 I just love this braid and the picot eding as well. You can find it here or on Ravelry as Fascine braid socks. Another post on my blog explains teh reference. While the picot flares, it fits just fine and looks great. I decided to devote one post to texture. Then when I come to report to Lynne, everything is all in the one post.
This little hat will be worn by some unknown to me child. A band of moss stitch around the bottom is a bit of a change to a rolled edge or ribbing. The yarn is Patons Smoothie which is a thickish acrylic and some Anny Blatt kid mohair green. Yes, I know, somewhat of a contrast, sublime to ridiculous or the opposite. I bought the mohair on sale and I've tried all sorts of things with it. It is the second of two balls bought some time ago. The other was a totally different colour. I've started various things with this ball and been dissatisfied . However, the cheap and the expensive together has made something totally different from either. The hat was done on 4 mm needles and the fabric is very firm. However, it's also delightfully soft to the touch. As I said, something totally different. I think I perhaps have enough left for a pair of small mittens to match.

Hat colour has more pink than blue tones in it. The mix is really quite pleasant to the eye as well as the fingers. 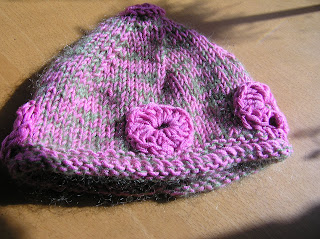 Another hat of the same mix and again it is really much softer in tones than appears here. A different bit of texture this time, some crocheted circles. All extra warmth and just something different. I need to check the Winterwarm site to see if there is anything about collections this year yet on it. The little hat was very quick to knit.

More texture is in some more penguins as the first were so thankfully received. And yet more is in the 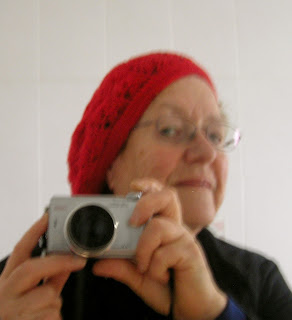 Ishbel beret, completed last week sometime. This was an enjoyable knit, although I'm still experimenting with the size to do. The band fitted well before blocking, but the lace looked dreadful. Blocking has shown the lace, but stretched the band somewhat. It's not really too big, but felt more comfortable before being blocked. I may go down to the smallest size given in pattern and then do an extra repeat of the first pattern chart to make sure it's slouchy enough for me.

Added a couple of weeks later; I've worn this beret several times now. After a haircut, it fit me much better and I really like it. It's the same Bendigo luxury wool as the second Ishbel shawl. It's very comfortable, I'd hardly know it was on my head, but it's also fairly warm.

What's even better, is that every time I wear it, I get compliments on it. When asked where I bought it, I tell them I made it myself. Much envy.
Posted by Jan at 2:45 pm

Thanks for putting all your textured knitting in one place - it's very thoughtful of you and makes my job of doing the round up so much easier!