shawl pin in use 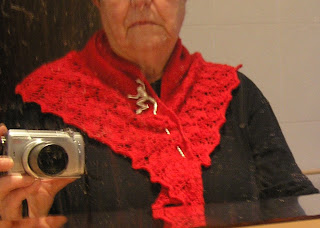 After Bells' enquiry yesterday about the shawl pins, I decided to take photos early this morning. Heavily cropped to prevent cold germs infecting all of you. Actually to spare you seeing my bleary, teary eyes and puffy face. I feel better, but still look pretty blah and cough at night when the temperature drops. It's a chilly morning here but the sun is streaming in the northern window in my bedroom corner window and I'm warmly dressed. I just checked the so-called weather station I gave my son. Outside temperature is at nearly noon is 11° and inside has dropped 3° since the timer on the central heater switched it off earlier this morning. House is now 16 ° inside.

I weighed the pins last night on DIL's new Tupperware digital scales. Her old scales work quite well for dividing skeins of wool, but the digital are great for small amounts. The thistle pin weighs 18 gm and the frog 24 gm. They both feel quite sturdy. 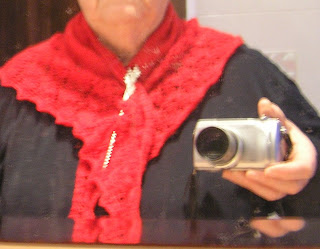 The pins do not feel too heavy on the light, soft shawl. They don't drag it down but they are perhaps just a bit longer than I would really like. I still like them a lot but would take off probably 2 cms if it were possible.

The spiral thread on the shaft of the pin grips the fabric well. While I was attempting to take a photo of the frog pin, I had a coughing fit. I think that while that was unplanned and unwanted, it was a good test of the stability of the pin. It did not move or even attempt to fall out and I ws coughing fairly violently. I'm sure the thistle would have been the same, as the width of the frog would make it more unstable. So thumbs up to both pins.

This post has been brought to you with the kind assistance of Sweetpea the Abysssinian. It's taken me a long time to get it ready. She's missing DIL greatly. She's been on my desk in the sun all morning, but suddenly decided she just had to be close. All over the keyboard and purring against my arm. She's even attempted to get on my lap under the desk. Unfortunately, her typing is even worse than mine and she can't spell. I of course can spell, I just make typos.
Posted by Jan at 11:43 am

Ah! Look at that! Fabulous. They add drama to an already dramatically beautiful shawl!

Lovely pins - all the better for seeing them in use!