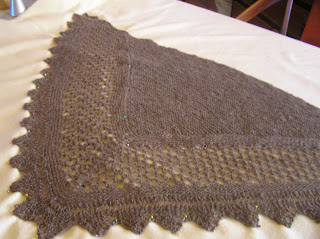 I finished Aestlight last night, although I redid the cast off this morning. This is the small size. Actually, that's definitely not the pattern's fault, but the wool I used. My opinion is that the person who bought this and gave it to me was duped. It's decidedly hand spun. Very poorly in places. Parts of it seem lighter than laceweight. It was bought at a stall at the NSW Spinners and Weavers Guild Open Day some years ago. I have no idea now who the vendor was, but I hope anyone else who bought anything from her got a better buy. What was sold as 5 ply, a bit heavier than fingering, is mainly 8 ply. I hate to think what size it would have turned out had I decided to do the large size. I could probably have used it as a blanket.

Why redo the cast off? The instructions said to cast off loosely and suggested possibly using a bigger needle for it. Aha, I thought. I'll save myself the trouble of changing needles and do the cast off recommended for Ishbel. Knit two, pass the slipped stitch over, place remaining stitch back on left needle and repeat till end of row. I did that, but it was so loose it was wavy and making frills.

So I waited till the better light of day, unpicked the weaving in of the end and carefully pulled back the entire row, picking up each stitch as I pulled it out. This of course gave me heaps of yarn to redo the row. It was difficult, however, as this is hairy wool and it grabbed. Still it's done and at least I had a proper edge. 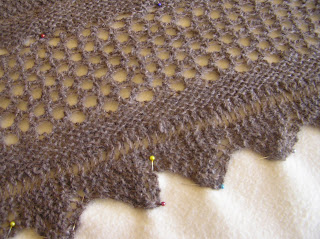 This is the birdsnest lace in close up. Another blogger had trouble getting hers to look as she wanted so I've given this close shot. It is this band which has the only purls at all in the pattern.

The shawl is easy to do, the pattern is nicely written and well set out. I'll probably do another one soon, but will get some weight better suited to make a cosy warmth for my neck. This is too heavy to drape properly as in the photos I've seen. It will be warm around my shoulders in my chilly room. So I'll put it around my shoulders and pretend I'm a Shetland crofter woman spinning. I think I'll be glad for conveniences like sanitation and gas heating.* Still, interesting history

I don't have the length required in any one colour in the weight the pattern asks for. Actually, I do have some of the sock yarn from the Knittery, now closed. However, it's the "thin" sock yarn, and I think I'll want something just a bit heavier. Oh well, an excuse to shop. I might walk down to Lindfield to go to Greta's. The weather's nice and the walk pleasant.

I think that blocking would have been easier if I had blocking wires to use. However, I don't. I pinned and re-pinned and did it again. Just had a thought. I have a birthday coming up. If someone should actually ask for a suggestion, I'll have an answer. I never give hints as I prefer surprises, but if someone asks...

* Not meaning that the Shetland Isles don't have the conveniences today of modern living. However, I think life there a couple of hundred years ago would not have been easy. It looks a fascinating place to go. I'll put the Isles on my wishlist of places to visit, along with the Scottish Highlands, Wales, Ireland and Brittany.
Posted by Jan at 11:05 am

Looks utterly gorgeous - and you were obviously listening to the good you when you re-did the cast off!

It does look warm and toasty though!

Blocking wires are definitely in order.

I like the look of this in the handspun - definitely cosy.

Not sure if I'll make this pattern or not, but if I do I will definitely learn from your cast-off experience!!

Oh me too - I much, much, much prefer surprises! But if someone asks... [and someone always does - usually my mum!!]