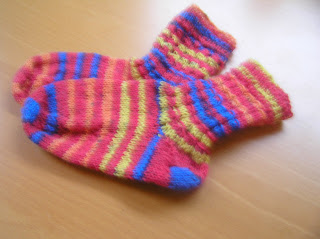 This little pair of socks is for Finn, my youngest grandchild who turns four today. His favourite colour is orange, although I note he also included his two-tone brown socks in that shade. However, he definitely picks out orange in cups, plates etc as "his." This is Heirloom Jigsaw sockwool which has an orange stripe in amongst those other bright colours. I hope it suits his tastes! I made up the pattern, although I'm sure I've seen something similar. Certainly, it was not knowingly copied from anywhere.

He asked me to mend his two tone shades of brown socks which I did last year and which still fit him. According to him, the cat broke them! A thread had been pulled out quite a long way. I've fixed them up, smoothed out the pulled fabric and woven ends in. I hope he's pleased with them. He loves socks from me and was very upset that a pair, two years old, were really far too small for him to wear. 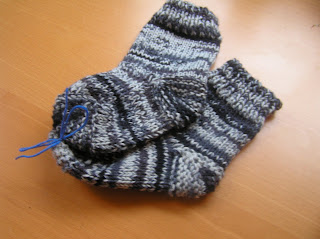 This little pair is for Winterwarm. A collection point has been set up for Sunday 23rd August at the Craft Show for goods for Winterwarm. I have quite a nice little pile of assorted garments now and will be pleased to give them away. I'm currently doing a headband, earwarmer type of thing, knitted in two colours in moss stitch. These are Patonyle, I had ten balls of this bought at a sale, so have plenty to use up. These are knitted in double yarn, so should be both sturdy and very cosy. 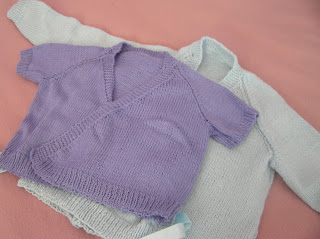 Here are more presents, again for grandchildren. The cardigans are crossover ballet style from a Sirdar pattern. The blue is in a Cleckheaton Country 8 ply wool and is for Miss 8, who turns nine next month. It looks big but it will still fit next year, I hope. This has been finished for a while now, but was sewn together only yesterday.

The deep purple is for her little 4 year old cousin whose birthday is in September. It's made from Bendigo cotton, one 200 gm ball having a reasonable amount left over. The third little girl will get one too, a sort of belated present, even though I did give her something on her birthday. Hers will be pink Bendigo cotton, short sleeves again. I've done one front of that one. 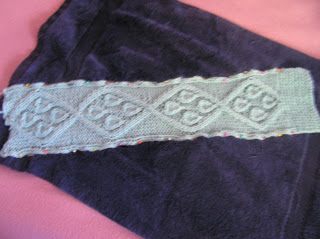 This last picture is for a headband for me. My desk is in the corner of my room and looks out through two windows which face basically west and south. This house is about 80 years old and the window frames are loose. Lots of wind as we are up high. I've stopped the rattle by poking some paper in in strategic places, but unfortunately that doesn't stop the draughts. My ears and head have been chilly here for the last few days.

I've been participating in Lynne's winter textured knitting. I've given a wrap-up of my last few weeks of textured FOs in the post below. I seem to be working on a mid-month to mid-month basis, where Lynne gives a wrap-up of textures at the end of a calendar month. It all works out somehow in the end and this band will go into my next month's finished knitting.

This lovely pattern is called "Homes of Donegal." I can find lots of references to it but the only pattern I could find came from Knitting-and. Once I realised the basic mistake I had made in the second row, it was fairly plain sailing. The pattern is over 19 stitches and there are three types of cable, all done on an odd number of stitches. The crossover, right at the beginning, is done on a 3/2 split. Stupidly, I did not see that the 3 stitches were placed to the back on the cable, so I placed them on the front. This threw my count out progressively through the 26 rows of the pattern. I couldn't work out why my little homes were migrating to one side and I made lots of little ??? on the printout questioning the stitch count.

One I realised where I had gone wrong, I ripped it all out and started again with no problems. I really like this pattern, and as I knitted I was thinking of different ways of using it. I love the names of the old patterns. Lots of different braids, homes of Donegal, print o'the wave shawl, Shetland patterns. All very evocative to me.

I've blocked it and will sew ends together when it's dry. I didn't stretch it lengthways, but pulled it slightly over the width to open up the pattern a bit. The garter stitch goes at the back of my neck and was done because a full pattern repeat would have made the band too long. Again it's some Bendigo 8 ply, probably Classic, but I've had it leftover for a while.
Posted by Jan at 2:47 pm

i love the orange stripe socks! they're so cute. i also like the purple sweater. i'm going to hunt for an adult pattern like that. i like how it crosses over.

Some wonderful finished projects! I hope the headband helps solve the chills :)

Did the headband live up to expectations?