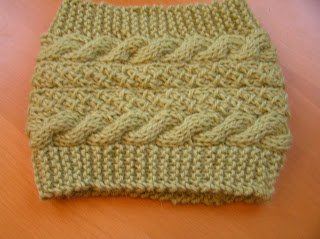 Here's another quick but cosy neckwarmer made from the best part of a leftover ball of Patons Jet. The elements of the pattern, both the cable and the braid are described in the blog in the side bar here to the right, Here's one I made earlier. I've used 37 stitches but thinner yarn and finer needles could use more. Cables and braid placements are entirely up to what you would like, although I have done a purl in between each element to separate them. The six stitch garter edge was to help stop the edge rolling.

I think this one will also be given away. I love the colour and have made one of Ysolda's Liesl cardigans from it, but it's not really my colour so close to my face. 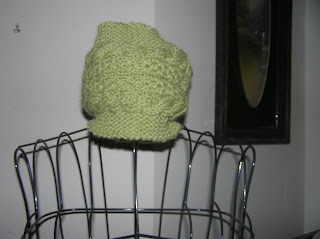 Here's the band on the wire model I used earlier for other photos. I didn't realise that one edge was a bit caught up. It's not really like that at all.

Today has been far too warm to consider neckwarmers, but tomorrow may well be back to winter. It's been very warm in Sydney, in the 20s. Ridiculously warm actually for the time of year, but a change has moved through. It's still not cold, I have only one thinnish knit layer on my top, but the sun has disappeared and it's very dark at 4:30 pm. It's also extremely windy here and the jacaranda outside my room is blowing wildly. I took advantage of the warmer weather and pruned a lot of bits and pieces in the overgrown front garden today. Not a real pruning, but a chopping at some of the rubbishy privet which is a noxious weed and some wisteria which took over the place last spring. The owner knows the privet should not be there but he had let it grow way beyond my ability to do a great deal with it. He said my son could chop it down, but I rather think he should have done it himself several years ago. He now thinks someone else can do it and save him the effort, or so it seems to me. I cut quite a bit of it some months ago, but it had a lot of fresh shoots, all about 2 metres long on it.

I spent quite a bit of time re-arranging my room the other day and have sorted through a lot of my wool. There's more in the garage, packed away, and when I finally get a place of my own it will seem like Christmas opening boxes which were packed a long time ago. I did sort out two quite large plastic totes which are full to the brim, almost overflowing, of just sock yarn. Hmmm.
Posted by Jan at 4:15 pm

Oh I love your neckwarmer!!! The weather her has been rather the same, unseasonally warm and then wintry. When the Sun starts disappearing about 4-30 it gets all dark and cold.
Your sheep scared the willies out of me with its munching!!!